And Then Jesus Shows Up

So, I’m guessing my first two Sunday sermons have been pretty challenging for you. I came out of the gate pretty strong. I’m not apologizing for that, but I did want to acknowledge it. Part of my job as pastor is to challenge people. I knew that going in to this field. But don’t ever think that it is easy for me to do. It’s not easy because when you challenge people you’re going to get some push-back and I have to be ready for that.

So, it was with great pleasure, and relief, when I read the Gospel reading for today. And although it has it’s challenging moments too, that I won’t let slip by, overall it is a very comforting text in my eyes. And though I love a good challenge, I know that we need to be comforted too. So, let’s dig in. Our story begins with the disciples who have locked themselves away in a room. Already, we need to stop there. John is communicating so much to us in that one verse alone! John mentions that they were afraid. Fear, another powerful force to be reckoned with, is a killer. To be fair, John does mention that they were afraid of the Jewish authorities, and we know from the previous chapters that they had good reason to be afraid of them.

But what else do we remember from all that John had written prior to this story? Things like, Jesus telling them to love one another, to love the world, to be servant leaders, to feed, to heal, to tell the story! Just to name a few! And here they are locking themselves up in a room, allowing fear to take control, and where is it getting them? Not to mention the fact that they can’t do all those things that Jesus just spent three years and his life, telling them to do! And here’s the kicker, this isn’t Jesus’ first resurrection appearance. Right before this story, in the same chapter even, Jesus appeared to Mary Magdalene, who then told the disciples! They already knew of the resurrection! And it still wasn’t enough. These were his closest followers and they were failing big time.

And then Jesus shows up. I would have loved to see the expression on their faces when he just waltzes in their unexpectedly. I imagine it being very similar to when, as a kid, I was told that I was grounded from playing my video games, but when my parents were away I’d sneak in a game or two only to have them come home early and have them ask, “What were you doing?” Oh, nothing, I was just organizing my video games and uh was about to do some dusting, yeah, that dusting you asked me to do,  a long time ago.

So, when Jesus shows up in this story I imagine Peter nervously saying, “Jesus! Hey, we knew you were coming! Mary told us! We were just heading out the door, to the uh local leper colony. Yeah, right fellas, we all signed up to feed dinner to the lepers. Cuz those are the kinds of things you told us to do right? Heh heh. John’s behind Peter, rolls his eyes and says, “Just shut up Pete, he’s not buying any of this.”

They’d been caught. And they thought they were afraid before Jesus showed up? Now they had a whole new fear to deal with as they watched Jesus mouth open to speak, probably about to lay into them. And what does Jesus say? “Peace.” “Peace be with you.” That’s probably all they needed to know that this was indeed Jesus. He probably didn’t even have to show them his wounds! They knew, this was their Jesus, giving grace that they didn’t expect, giving them exactly what they needed in that moment, peace. For them, in that moment, the resurrection meant death to their fear. In those four simple words, Jesus was able to assure them that, in spite of their behavior, in spite of their fear, he was still there with them, and still wanted the best for them.

So that’s scene one of our story, scene two is all about Thomas. Thomas didn’t seem to be having the same problem with fear that the rest were. He was out and about when Jesus appeared to them and missed it! His problem was outright disbelief. He just didn’t believe it! And notice that it doesn’t say that he doubted. The Greek verb here is belief not doubt. You can believe something and still have doubts about it. We often think of doubt as being the opposite of belief but that just isn’t true. I would go so far as to say that belief and doubt go hand in hand, they kind of feed off each other. I have doubts all the time, within my beliefs. In fact, if you think about it, if we had no doubts, what would be the point of faith and beliefs?

So poor Thomas even gets the nick name, Doubting Thomas and it’s just not true. He didn’t believe. And he was pretty bold about it, I’d go so far as to say he was arrogant about it. Because remember, he does not believe that Jesus is still alive. And if he didn’t think that Jesus was alive, then he could be as bold and arrogant as he wants about his disbelief. And then Jesus shows up. 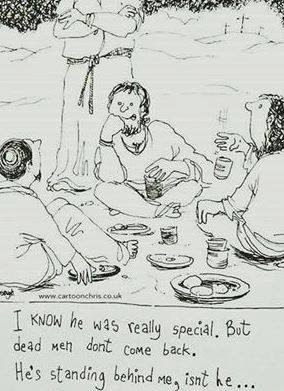 Oh to see his face when that happened! I don’t know who was more afraid of what was about to come out of Jesus mouth, the fearful disciples who locked themselves in a room, or poor unbelieving arrogant Thomas! And what does Jesus say, “Peace be with you.” And though the circumstances are a bit different, his message is the same. In spite of your arrogance Thomas, in spite of your unbelief, I’m still here for you, and I still want the best for you Thomas.”

So one time I was visiting a very elderly lady. It was the first time I had been to her home and she was very anxious to visit with me. She welcomed me with open arms, treated me as if I was royalty, shared some of her life stories with me, and we had a wonderful visit. Then a moment came when she became very serious.

The expression on her face changed, her posture changed, and with her big beautiful, if hazy eyes, she looked me square in the face and says, “I have to ask you a question pastor. I want to know if it’s ok that I ask God to take me. Because I’m ready.” She asked this in almost a whisper, as if God couldn’t hear if she was quiet enough. The guilt she carried around with her all day over this question was unbearable. And I found myself in a position to offer her the same thing that she had already offered me as she welcomed me into her home and into her life, peace.

My hope is that somehow I was able to communicate to her the same message of Christ to his disciples, and to Thomas. “Peace be with you.” That in spite of her guilt, in spite of her weariness, she was able to hear Christ say, I’m still here, and I still want the best for you. No more fear, no more unbelief, no more guilt. Have courage, believe, be free. Peace be with you. This is what we communicate to each other when we pass the peace during worship. In spite of our faults, our failings, our feelings, all that we are ashamed of, Christ still shows up, Christ still wants the best for us. Thanks be to God. Amen.