So, We're Giving Up Church For Lent 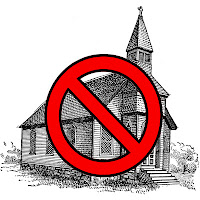 I wish this blog had a great explanation for why we are doing this, but I know that by the end of this post, many of you will be scratching your head, me included.

I've never been one to give up something for Lent. However, I do fast on Holy Saturday (the day before Easter). But as far as giving up sweets, or beer (gasp!), or anything like that, it's just never really been my thing.

However, lately I have been feeling a pull to do something for Lent. I searched online and found a ton of great ideas, like this one from our United Methodist siblings: Lenten Photo-a-Day Challenge. But most of the ideas that I found are either too time consuming or, to be honest, require too much commitment. If I don't think I can do something completely and do it well, I usually choose not to do it, that's just my personality.

So, the other day it occurred to me, what would happen if we gave up church for Lent? Just stopped going for six Sundays in a row. What affect would that have on us? Hmmmm. But I couldn't make this decision on my own.

So, yesterday I told my wife about this idea and you would have thought I was speaking a foreign language. She just wasn't getting it. It took a while for her to even compute what I was saying.

Last night at dinner, I shared my idea with the rest of the family and to my surprise, my 8 and 12 year olds literally yelled out "No!" After we talked about it, their curiosity peaked, like mine has, and we decided to go ahead with it, whatever it is. A Lenten discipline? An experiment?

I know it sounds crazy. It may even sound plain wrong. But it doesn't feel wrong. Of course, it could be disastrous, but I've learned to trust my instincts. I told God the other day that if this was a bad idea than he better let me know, and soon! God was silent...but not in a bad way.

So off we go, on this Lenten...whatever-we're-calling-this. May God bless your own Lenten journey, in whatever form it takes. Pray for us. I'll be praying for you, just not in church.
Email ThisBlogThis!Share to TwitterShare to FacebookShare to Pinterest
Labels: church, discipline, experiment, family, journey, lent, thoughts