1st of 3-week sermon series on the Apostles' Creed

This week we begin a short three-week series on the Apostles’ Creed. Followed by a series on the sacraments, and then a series on Stewardship. Those sound fun, don’t they! Well, they do to me! I haven’t gotten a chance yet to do a series that’s more topical in nature. Most of the others have been centered on a particular book of the Bible. Having said that though, all of these series will be taking us back to the Bible, back to the origins of all those topics as found in the Bible. Of these three series, I think this one will be the most challenging for me. Not because it’s a difficult topic, but because I have mixed feelings about creeds. Some of you may not know this but not all churches use the Apostles’ Creed, or our other one, the Nicene Creed.

Some churches use entirely different creeds. Some churches use none. Some churches, like my last congregation, write their own creeds! To varying degrees of success but we don’t need to go there. These aren’t my issue though. My issue with creeds, come from the way they have been used in the past, and continue to be used today. Rather than being the useful teaching aids that they could have been, they have usually been used as a line in the sand and therefore a tall border wall keeping many people out. Instead of helping people explore the basics of our faith, they were used as a litmus test to keep people out of churches who didn’t believe exactly like them. Churches have a bad habit of not wanting people who are gonna question their beliefs. Imagine that! And the creeds began being recited in the same spirit that we recite the Pledge of Allegiance.

Today, many churches still recite a creed every Sunday. Bethlehem did here too, that is until they met me. I use it in worship, begrudgingly, during seasons that it makes sense to use them: the Apostles’ Creed during Lent as it is the creed most associated with baptism, and the Nicene Creed during the season of Easter, but not on Easter Sunday! And here’s why, Easter Sunday is when we have more visitors than any other Sunday. And where do visitors come from? Everywhere! From every culture, from every generation, from every status, from every walk of life, and, from every walk of faith, sometimes of no faith! Which is why we only use a creed for two seasons a year. Because it’s about reading the room, only the room for us is the entire world.

Today there are more unchurched people than the church has ever seen before. The church decline that so many churches are really feeling today, started back in the 60’s. So now we have multiple generations of people that just don’t have much, if any, experience in church, let alone know much about our faith. I mean, people don’t even want their weddings and funerals in church much anymore! However, for many people, maybe even some of you, there comes a point in their life when something sparks their interest, their curiosity. Sometimes it’s a relative that sparks that interest, sometimes it’s a friend, a birth of a child, sometimes it’s a life tragedy of some kind. And so they show up on our doorstep, for Sunday worship, and are expected to begin reciting “I believe in God the almighty…etc.”

If that happened to me, I’d be thinking, “Whoa, whoa, whoa! Hold up a sec! I just got here! And you want me to agree to what?” Some might think, “Well, no one said they had to recite it with us!” And to them I’d say, but how do think that makes a visitor feel? How welcoming is that? That would be like me having one of my atheist friends over for dinner and making her sit through a prayer! I’m not doing that to them! I bet many of you wouldn’t either! Because one, you know hospitality better than most. And two, you also know how not to be a jerk to people! When we welcome people, we welcome all of them, everything that makes them who they are, and who are they are not. And that means welcoming their questions, their inquisitiveness, their doubts, their skepticism, their level of knowledge of things we have taken for granted, their arguments and debates!

In the grand scheme of things, over the past two thousand years, this is not something that the church has had to adjust to in a long time. Not since the first century of our existence. But if the church has any future in the world, it’s gonna have to start learning a whole new level of hospitality. We’re now in the bonus rounds of hospitality! This is like a surprise quiz in hospitality class at the end of the semester! No longer are all our new members gonna come in nice, neat little packages with a bow put on by their previous congregation. No, that’s too easy! Some are going to expect us to put our money where our mouth is and walk with them, no matter how uncomfortable their path may be; explore faith with them; give them a safe place to wrestle their doubts; and give them all the time they need, and then some.

But slapping them with a creed on day one, is not the way to do that. And let’s be honest here, there’s lots of stuff in our creeds that many of us have questioned, and continue to wrestle with. So, let’s not pretend we’ve got our act together here either! But our faith is not about knowing a bunch of facts, it’s about the journey, with God, with each other, and with the world. And speaking of the world, the first section of the Apostles’ Creed is just one line, but it’s a powerful one! “I believe in God, the almighty, creator of heaven and earth.” It seems pretty straightforward, but I assure you, volumes have been written about this one line! We could talk about what it means to believe in something or someone. We could talk about what it means to be almighty.

We could talk about what it means to create, or what and where heaven and earth are. But I think we will talk about something that we don’t recite here at Bethlehem, the word Father. Now, we don’t use that title here often because not only is it not the way many people see God, but for some it’s too painful, like those who have had no positive males in their life, maybe only abusive ones at that. So to lump God in with all those, is just too big a hurdle for many, and I don’t blame them. So, we try to use neutral language and titles for God here, but I’ll be the first to admit, we lose something when we drop the parental language. But, “I believe in God, the parent almighty” just sounds stupid. So, I was thinking, if I were writing this 1500 years ago, how would I describe God?

Well, hopefully, I would have the sense to ask Jesus. No, I don’t mean in prayer. I mean, what did Jesus have to say about God the almighty creator? How did Jesus describe God? In the Gospel of Matthew, Jesus said this, “Look at how the lilies in the field grow. They don’t wear themselves out with work, and they don’t spin cloth. But I say to you that even Solomon in all his splendor wasn’t dressed like one of these. If God dresses grass in the field so beautifully, even though it’s alive today and tomorrow it’s thrown into the furnace, won’t God do much more for you, you people of weak faith?” Y’all think I’m rough on you! At least I’ve never called you people of weak faith! Seriously though, Jesus here is taking a look at the God of creation and seeing a God that cares for that creation. 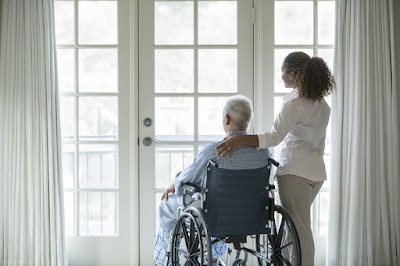 Cares deeply, and personally. This is not a God who set the world in motion and then stepped away. This is not a God who watches from afar when God gets bored. Jesus saw a God so intimately woven into our lives that God even cares about our basic needs. And this is the God that we proclaim in the first line of the Apostle’s Creed. So, to answer my own question, if I wrote this first line centuries ago, I think I’d write it something like this, “I believe in God the almighty, the creative caregiver of heaven and earth.” I like creative caregiver because, one, it’s not locked in the past, as if God’s act of creation isn’t still going on. And two, because caregiver gives it that parental touch and so much more. I also think of the way that an adult child becomes the caregiver of their parent, in the greatest role reversal of life.

I think of the single parent trying to make ends meet while being the caregiver their children need. I think of the hospice worker who somehow treats their patients as if they were one of their own. I think of the schoolteacher who sacrifices her own income for children who aren’t even hers. I think of the nurses who saw us through the pandemic, often being the only one to sit with the dying as COVID overtook someone else’s loved one. Is God a father? Sure. Is God a mother? Sure. But God is so much more than either of those titles. That is the God that Jesus knew. And that is the God that we proclaim in that one little line from the Apostles’ Creed. Thanks be to God the almighty, the creative caregiver of heaven and earth. Amen.