I love plot twists. The Bible is full of them as we’ve seen but I think this one in the first chapter of John often gets overlooked. Plot twists are usually given in the middle of a story or sometimes at the very end. I love the kind that come at the end and makes you want to watch the movie all over again because the ending changes the story so much. Alfred Hitchcock had a masterful way of giving you all the answers you needed throughout the story to solve whatever the mystery was, and you didn’t even know you had them! And that’s exactly the kind of plot twist that I see when I read the opening words of John’s gospel, “In the beginning…” I remember telling you back on September 12th, when we began reading through the Hebrew scriptures with Genesis 1 that it was kind of odd that they waited until the fourth and final year of the Narrative Lectionary readings to have us read Genesis 1. 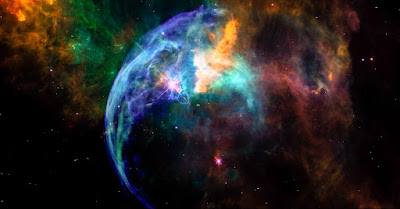 Well, this is why, because they paired those Hebrew scripture readings with the Gospel for that year and this one makes this beautiful connection to Genesis, as well as sets up this plot twist. Because when you begin reading John 1, you realize two things. One, that because John makes this obvious connection to Genesis 1, that God must be up to God’s ol’ creative business again. And not only that but that God never stopped! That God has continued the work of creation ever since! And now John tells us that this Word character, which he eventually reveals the identity of but not right away, because John loves being mysterious, is somehow connected to creation, as far back as Genesis 1 even! What is this thing! What is this mysterious Word that he speaks of? How is it connected to creation?

So many questions arise just from John’s opening lines! It’s the kind of plot twist that, by the end of John, will make you want to go back to the Hebrew scriptures and reread them in this new light of Jesus that John has provided us. Thankfully, we’ve already done that for the past three months, so let’s forge ahead, because John may like to be mysterious but he’s also very excited to reveal this plot twist to you so he dives right in by saying, “In the beginning there was the Word”, ok, “and the Word was in God’s presence”, so the word was with God in the beginning, alright, “and the Word was God.” Wait a sec, say again? The word was God? How can the word be with God and be God at the same time?

Now, in light of last week's reading from Isaiah, we might be tempted to assume that the Word here is God’s promise, referring to God’s covenant, God’s vow to love us no matter what. Well, you wouldn’t be wrong, that’s just not the whole picture. John continues by saying that the Word was life and light, more creation imagery, a light shining in the darkness, a darkness that cannot overtake it. Ok, so John is still being a bit dodgy with the facts. Just get to the point John! What is this Word? John finally says, “And the Word became flesh and stayed for a little while among us.” Ahh, now we’re getting somewhere! So, the Word isn’t just a concept, nor is it just an action of God’s. This is a person! Flesh! Like you and me! Who is it, John! Well, he filled with grace, filled with truth too! Damn it, John, just tell us who it is! Jesus Christ!

But John doesn’t let up. John yearns for the reader to stick with it, don’t give up, hear what he has to say, and then at the end, you decide. Because for John, this is the heart of the Gospel. What Jesus does in the coming chapters, the miracles, the teachings, the sacrificial nature of his ministry, even the resurrection, none of that makes any sense to John without both the divine and human nature of Christ. It was a bold proclamation. It was a risky proclamation. It’s not only a plot twist but a rhetorical twist as well. Usually, an author tries to win the audience over before throwing something controversial at them! Not John. This is just too important for John. The other Gospel writers beat around the bush about this compared to John. And I love him for his boldness right outta the gate.

Don’t’ get me wrong, many of you know that this is my least favorite Gospel, and that John is going to frustrate the hell outta me in the coming months. But if I’m honest, it’s hard not to fall in love with this guy from day one. Alright, before I get too sappy, let’s not forget where this all started. “In the beginning…” Our God is the god of creation, and John tells us that this work of creation has never ceased and that somehow Jesus is a part of that. So, it begs the question, what have they been creating? I mean, it’s not like new plants and trees have been appearing out of thin air. Or new fish in the sea. Or new bugs, although that would be cool. Especially a new spider whose bite gives you superpowers? Yeah, it’s a good thing I’m not God. So, if it’s not those things, what have they been creating all this time?

This is gonna sound like a Lutheran cliché but hear me out, grace. I believe with all my heart that what they have been creating since day one, is grace. And that work of creating grace is about to come to a head in the birth, life, death, resurrection, and ascension of Jesus Christ. But what is grace? Well, I could tell you, but I’m gonna take a page out of John’s book and remain mysterious about it for now. One of my favorite scholars on John, Karoline Lewis, pointed something out that I had not known, or I wasn’t paying attention that day in class, which is highly possible, but I found this fascinating. She points out that the word grace is used only four times in the entire gospel and all four of those occurrences are in these opening verses of John. And here’s why.

If Jesus was the Word that became flesh, then he is grace incarnate. The very embodiment of grace. And so, as such, the rest of the gospel of John, rather than tell you about grace, shows you “what grace looks like, tastes like, smells like, sounds like, and feels like”, through the birth, life, death, resurrection, and ascension of Jesus Christ. That’s good stuff, isn’t it! I’m not gonna lie, I’m looking forward to reading through this with you! I have a feeling there’s a lot of good stuff coming our way, as well as a lot of plot twists. If we’ve learned nothing else about God, we’ve learned that our God is full of surprises! Before I let you go though, I have some homework for you.

Earlier I mentioned that the story of Jesus as presented by John should lead you to reread the Hebrew scriptures in light of this Word that became flesh, the Christ event as it has come to be known. Don’t worry, I’m not gonna ask you to reread those again. But I would like you to do some rereading of a sort. In the same way that Christ has given us the opportunity to see grace in the Hebrew scriptures that we may not have seen before, Christ also gives us the opportunity to reread our lives, in the light of Christ; to look back on our pasts and see the creative work that has been at play in it; to see Christ's handiwork throughout our lives; to reinterpret events from our lives knowing that Christ was weaving grace into it all. That is the kind of rereading I’d encourage you to do this week. And if you’re willing, have those conversations with others, share what you discover in that rereading of your lives, all the many and surprising ways that Christ has been creating grace around you, in you, and through you. Thanks be to God. Amen.