It seems like forever now that the election has been on our minds and on the news and of course all over social media. I’ve seen a curious meme floating around in reference to it. Sometimes it says, “No matter who wins the election, God is still on the throne.” And sometimes it just says, “God is still on the throne” with stars and stripes around it, in clear reference to the political atmosphere of the day. Whatever iteration it comes in, I’m always puzzled by it. I always want to ask the sharer, “What does that mean exactly?” But of course, I never do, because I typically don’t argue politics or religion online. I still wonder though, what do they mean by, “God is still on the throne”, especially in reference to the election? Do they mean that God is somehow in control of the election? Probably not. I’m guessing that it’s meant more in the general sense, but even that is problematic. What do people mean when they acknowledge God being on God’s throne? What do people mean when they say that God is in control? We have lots of cute little phrases for it, don’t we! Like, “Let go and let God” or “Just leave it in God’s hands.” Again, what does that even mean? What are we really saying here? Do people imagine that God is somehow behind the scenes of everything, pulling strings and levers, making sure we turn right instead of left? Is that really how we think God works? Is that what people imagine when they share, “God is still on the throne” all over Facebook?

Our Bible story from Isaiah that we have today is short but don’t let that fool you. It’s quite a story, jam-packed with some really vivid imagery. It’s another call story, which we have had the fortune of reading quite a few of this Fall. This time it’s Isaiah’s call story. This one’s a little unique in that he had already been doing the work of a prophet before this. But in this story, Isaiah gets a direct vision from God, and a specific message to share with God’s people. Not only that, but Isaiah volunteers! You heard that right, what we have here a bonafide volunteer prophet! We’re so used to prophets who come to their first day of orientation kicking and screaming and complaining and giving every excuse as to why they’re the worst person for this job! He doesn’t do so arrogantly, which we will get to in a minute, but how refreshing to have one that actually volunteers! And here’s why he may have done that. 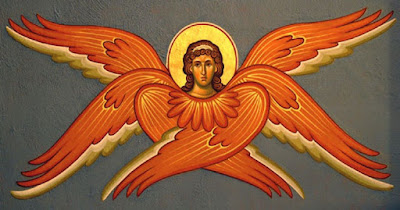 This story comes from chapter six of Isaiah. In the first five chapters, Isaiah had been sharing oracle after oracle of all the doom that was headed their way. There were some hopeful verses thrown in there too but it was mostly doom and gloom. It was about to get real bad for the kingdom of Judah, worse than they could have possibly imagined. So, after relaying that message for five chapters, Isaiah is given this vision of God’s throne room. It’s a majestic scene! God is sitting high on a throne wearing a huge robe, the hem of which fills the whole room. Winged creatures, called Seraphim, each with six wings, are flying about the room as they cover their eyes and feet, shouting “Holy, holy, holy Lord, God of power and might, heaven and earth are full of your glory” as the room shook and filled with smoke. Like I said, vivid imagery. Those words they were shouting might sound familiar to you, we sing them right before communion, right before we too come into the presence of God in the bread and wine. Sidenote, most pastors close their eyes during this part, in the same way that the Seraphim covered theirs, and in recognition of the majesty and mystery of what we are about to partake in. Just a little liturgical trivia for ya, but back to our story.

At the end of our reading, God asks, “Whom should I send, and who will go for us?”, which is curious in and of itself but we’ll leave that discussion for Wednesday evening’s Bible discussion. Who responds to God’s question? Isaiah does, “I’m here,” he says, “send me”, cementing his position in many a stained-glass window ever since. Now, we don’t read this passage very often, and even when we do it’s rarely preached on, but when we do, the emphasis is often on God’s majesty in the throne room, or on Isaiah’s courageous volunteerism, and how we should be more like Isaiah. Neither are wrong, but neither are what drew my attention this time ‘round. What drew my attention was that middle scene, where Isaiah, in what I believe was genuine humility, acknowledges his unclean lips, and how they might get in the way of what God may need him to do. Immediately, in flies a seraph to save the day with a hot coal that the seraph touches Isaiah’s lips with saying, “Your guilt has departed, and your sin is removed.” 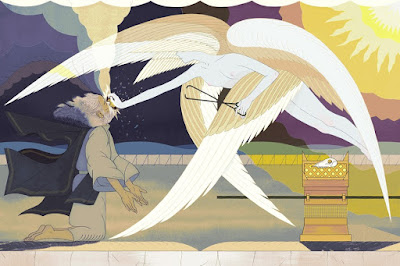 It's a very strange scene, the meaning of which scholars have debated for millennia. There’s one theory in particular though, that really moved me, that I’d like to share with you now, because I believe that it has profound modern-day applications. So, this lip cleansing ritual was a very common ritual in many different religions of the day. Whether we like to admit this or not, rituals often were shared by many religions, like baptismal rituals, eating rituals, marriage rituals, and the like. This may very well have been another shared ritual. Mouth or lip cleansing rituals came in a variety of shapes and sizes but the general idea was this, if the mouth or lips were clean, then the whole body was clean. Let that sink in for a moment while I give you two modern-day rituals that might help you put this into perspective.

When people join our church, one of the rituals that we use at the beginning of their journey with us is called the Welcome Rite. During this ritual, the sign of the cross is traced on various parts of their body with corresponding words, such as, “That you may bear the gentle yoke of Christ, receive the cross on your shoulders.” As well as, and this is the part that our story reminded me of, “That you may sing the praise of Christ, the joy of the church, receive the cross on your lips.” Each year, the receivers of this rite always share with us just how meaningful it is. So that’s one modern example of a lip cleansing ritual, but it also reminded me of a Maundy Thursday’s foot washing, and Jesus words that “those who have had a bath need only to wash their feet; their whole body is clean”, furthering this idea that ritually cleansing one part of the body, makes the whole body clean, just like Isaiah’s lips being cleansed by that red hot coal.

Now let’s take this a step further. You know that old saying, “Actions speak louder than words.” As much as that may be true sometimes, this story is saying just the opposite, and holds just as much truth. This story exclaims a message that is oh so vital for us today, and that message is this: words matter. I don’t think it was just a coincidence that the seraph cleansed Isaiah’s lips in order to forgive his sins, as if the seraph could have chosen any part of the body. No, Isaiah’s ministry, like most prophets, was going to entail the use of many words by the prophet, many painful words for God’s people to hear. Words were going to be the vehicle that both God’s judgment and God’s grace would be delivered by, and so, words matter. Or as Jesus put it so succinctly, “It is not what goes into the mouth that defiles a person, but what comes out of the mouth that defiles a person.”

If this election season has taught us anything, I hope that it is at least that words matter. If we hold words in such high regard when we are spreading the good news, then we ought to fear their power just as much when they are used for destructive purposes. Do you remember when we used to say on the playground, “Sticks and stones may break my bones but names will never hurt me.” Bull! Names hurt, words hurt, and the pain that words inflict can last a lifetime. Isaiah knew that. Jesus knew that. And I think we do too, we just forget sometimes and need reminded by a great prophet like Isaiah. This Bible story carries with it both challenge and grace. The challenge here is to ask ourselves just how clean our lips have been. Do we need a seraph to come with a hot coal before proceeding with what God is calling us to? The grace here is that God loved and used Isaiah’s gifts even before this throne room scene. And if God can call Isaiah, unclean lips and all, God can call us to, and God does. Thanks be to God. Amen.