I know I say this all the time but Job is one of my all-time favorite characters in the Bible, maybe in all of literature! I wish we had time to read more of this book but we will get the highlights over the course of five Sundays. You will certainly walk away with the gist of the book, and hopefully with how to use it in your everyday life. If you’d like to read more, let me once again point you to the online daily devotions and readings which will fill in the gaps of the parts that we had to skip between the Sunday readings. It really is a great resource, especially during a pandemic. But enough of the advertisements, let’s talk about Job! I’m going to do something I never do and begin at the end. One of our members, RuthAnne Ijames, told me she is in the habit of reading the end of a book first, to see if it’s gone end well before she commits to it! So, in that spirit, let me read to you the last sentence of the book of Job, “Then Job died, old and satisfied.”

Now, if you read that and think, “Oh this is gonna be a great book with a great ending!” Well, don’t get your hopes too high. I guess it all depends on what a “good ending” means to you. But I’ll tell you right now, a lot of people walk away from this book very unsatisfied. Does the character Job end up in a good place? You could say that. However, where it leaves a lot to be desired by many is as a Bible book that is supposed to teach us something, answer our questions. And in the case of Job, a very specific question indeed, “Why? Why do people suffer? Why do the good suffer, and the wicked prosper?” That’s a big question! And one that the world has been asking since the beginning of time. This book searches for that answer but, spoiler alert, it comes up short. Or maybe it doesn’t! Maybe a non-answer is the answer! But before we get ahead of ourselves, let’s tackle these first two chapters that I just read.

By way of introduction, the book of Job is a work of fiction. It’s no accident that it begins with, “Once upon a time...” And even if we read it in the New Revised Standard Version it begins, “There once was a man in the land of Uz…” I mean, come on, who begins a work of nonfiction like that? It is designed to let you know that what you are about to hear is a story, in the truest sense of that word. For some, this is a hard pill to swallow. Finding out that some parts of the Bible are made up seems to take away from it for some people. If you are one of those people, I urge you to stay away from seminary! For me though, it’s a relief. Especially with this book! If this were a historical account, there would be some things about God in here that I just couldn’t swallow!

However, in spite of its fictitious nature, or maybe because of, it contains some of the most profound truths that the world has ever heard, no, not just heard, experienced! This author invites us, draws us to experience this life of Job, so much so that by the end of chapter two, you are in fact sitting in that silent pile of ashes with Job and his friends, waiting, begging for someone to say something. Think of this book as a “what if” book. We all play that game every once in a while, when we ask each other, “What if…” and then you ponder some scenario, sometimes outrageous scenario, just to see where it might end. That’s what this book is like. Someone asked, what if God was asked a question by one of God’s subordinates in heaven and then was tempted to prove that God’s answer was correct? And the book of Job was born. And so, I invite you, to journey with Job, to struggle with Job, to sit with Job, just don’t forget to put your seatbelt on.

We don’t know much about Job. No one knows where the land of Uz was, which is another clue that this is a fictitious work. If it was written today it would probably be the “land of Oz.” What we do know is that it was in the East. That is not an insignificant detail. That tells us that Job was an outsider, a Gentile, not of the Jewish faith or culture. This is significant for multiple reasons but two most important. One, it means that the answers that are sought in this book are for everyone, that these are not just Jewish struggles, they are human struggles, and so these truths are for all and are universal. And two, it is further evidence of how wide-reaching God’s love is, even in these old, old stories from the Hebrew scriptures. Grace abounded, long before Jesus was a twinkle in God’s eye.

Job was a well-to-do man, and was also a devout God-worshipper. He was so devout, it’s hard not to roll your eyes at this guy. He didn’t just go to worship for himself, but he made offerings on behalf of his children, just in case they sinned since the last time he went! That’s how devout this guy was! You all know people like this, right! Those people that go to every worship service and they’re always at the church doing things. Ugh, pastors can be so annoying! But you know, I don’t think Job was doing any of those things in a sanctimonious way. I really get the feeling that he simply loved God and loved his family and wanted to do right by them, even if it came off a little overzealous at times. And that’s what makes this story so painful to read.

So, Job loses almost everything, his wealth, his possessions, his children, all ten of them at once. Oh, and just to top it off, his health too. Why? Would you believe me if I told you it didn’t matter? I’m not kidding! I know that part about God and the accuser arguing over whether or not Job is gonna falter or not is quite seductive storytelling but I honest to God don’t think that’s the point of this story, otherwise the author wouldn’t have wasted it in the first two chapters of a forty-two chapter book! It’s just the spark that gets the story moving, which is why scholars of called these first two chapters the prologue. The meat-and-potatoes of this story is what follows in the next forty chapters, where we get to see how Job and his friends react to his predicament, where we get to hear them process his pain, and in doing so, they not only process their own, but they help process ours too. Will we all come to the same conclusion in the end? Well, I don’t want to spoil the ending but no, we won’t. Hence the unsatisfying ending I mentioned earlier. 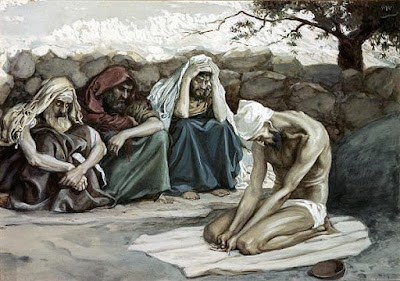 The prologue ends with three of Job’s friends entering the scene, creating one of the most profound images of care. There is Job, scrapping the lesions off his body with a broken piece of pottery, sitting in a pile of ashes, his torn clothes strewn around him. In walk his three friends, Eliphaz, Bildad, and Zophar. They had heard what had happened to him and had come to console him. Life had struck him such a blow that they didn’t even recognize him, and it brought them to tears. They all tore their clothes and scattered dust on their heads, in solidarity with their friend Job. And then they sat with him. For seven days and seven nights they just sat there. They didn’t try to fix his situation, they didn’t try to give him advice, they didn’t try to explain his pain away. They tore their clothes, scattered some dust, and just sat there, with him, in silence, for seven days and seven nights.

Have you ever experienced that? Have you ever received that kind of ministry of presence, as many have called it? Have you ever sat with someone like that? Odds are, you can answer yes to one or both of those questions. Sometimes, more often than we’d think I’d argue, that is the most meaningful way to care for someone—to sit, or stand, in solidarity with someone, and just be there for them. Maybe it’s someone who’s had a death in the family. Maybe it’s someone who’s just lost a job. Maybe it’s someone in recovery. Maybe it’s someone in a health crisis. I’m reminded of a friend of the family who lost her hair due to cancer treatments and my daughter Grace shaved her head to support her. Or, maybe it’s not a person but a group of people. For instance, as a person of color, every time I see a white ally either join a protest or post something on social media to fight racism, I can feel them sit with me, in solidarity, in the pile of ashes that every person of color sits in. Now, we’ve got a lot of Job to get through in the coming weeks, and we will be struggling with Job on some big questions concerning who God is, and who we are, and why people suffer, but for me, none of that matters, if we can’t figure out how to sit in solidarity with one another in the many and various ash heaps of life. But when we do, Grace will abound. Thanks be to the God of Job. Amen.