Who Do You Say That We Are?

Like many of you, I have been following the political landscape lately, particularly the various campaigns as they rally towards the upcoming election. As someone who is fascinated with sociocultural anthropology, which is just a fancy way of saying that I’m a people watcher, but not in a creepy way, I just love to figure out what makes people tick, how they interact with each other, how they present themselves, how people adapt depending on their environment or company they keep, all that stuff. So, watching these debates and rallies is like candy for someone like me! Ok, that did sound kinda creepy. Anywho, one of the things that I have noticed about all these presidential candidates is the way that they present themselves to those whom they hope will vote for them, you and I.

The way that they do this has intrigued me. Most of them use some form of an “I” statement to introduce themselves, “I am blank, and I” and then they usually finish that statement with something they believe or something that they will do or something about who they are. For example, Amy Klobuchar recently began a rally by saying, “Hello America, I am Amy Klobuchar, and I will beat Donald Trump!” And of course, the crowd went wild!

These politicians know how to get a reaction from a crowd, that’s for sure! And they know how to key in on the thoughts and feelings of American voters with their little catchphrases like that. Now all that makes for great campaign moments but what I find fascinating about these I am statements from all the politicians is that it really doesn’t matter who they think they are, what really matters is who voters think they are.

Hold that thought and let’s move to our reading for today. The Sunday before Ash Wednesday is always Transfiguration Sunday, the day that we retell the story of the disciple’s mountain top experience with the transfigured Jesus, in all his glowiness. It occurs smack dab in the middle of Mark’s Gospel, and that is no accident. It functions as a major turning point in the overall narrative that Mark has invited us into. It’s the moment when they realize that this Jesus may be something more than just a wise rabbi, more than a prophet, more than a miracle worker, more than a healer. It not only causes them to reexamine all they had experienced with Jesus up to that point, but changes how they see him from then on.

And with that in mind, I’d like to focus on the scene just prior to them traveling up that mountain. Jesus asks, “Who do people say that I am? They told him, “Some say John the Baptist, others Elijah, and still others one of the prophets.” That was easy for them to answer. Anyone who was paying attention in the crowds that had been following Jesus could probably answer that question. But Jesus doesn’t stop there. He looks them in the eye and asks, “And what about you? Who do you say that I am?” That may have been a little more difficult to answer. Only one person answered that time. Good ol’ Peter. “You are the Christ,” he says. But I’m more interested in the question than I am in Peter’s answer.

It occurred to me, maybe for the first time, that in this story, and the Gospel of Mark in general, Jesus is more interested in what others are saying about him, then he is about telling everyone who he is. Maybe it’s all the election campaigning that I have been watching on TV lately that made me notice this, I don’t know, but I found that quite intriguing. Contrast that with John’s Gospel, where Jesus is telling everyone who he is with “I am” statements: “I am the bread of life…I am the light of the world…I am the good shepherd.” At every turn in John’s Gospel, Jesus is telling people who he is. John presents a Jesus who would have made a great politician! Add that to the plethora of reasons why it’s my least favorite Gospel. But this is not the Jesus that Mark presents to us.

Mark’s Jesus asks a question that most of us wouldn’t dare ask anyone, let alone the public!” “Who do you say that I am?” I mean, maybe it’s my debilitatingly low self-esteem but you’d never hear me ask, “Who do you say that I am?” I’d be too afraid of the answers! My thin skin would rip like tissue paper! Now, whether or not Jesus had the same fears is up for debate, but what we do know, is even if he had those fears, he didn’t let them get in the way of asking people who they thought he was. 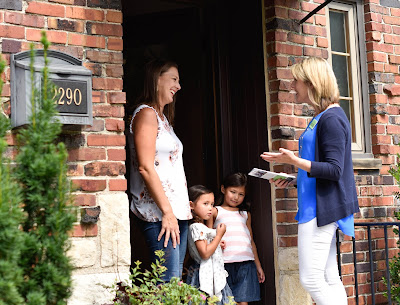 We’d have been able to hear what people were saying about us and been given the opportunity to make any course corrections that needed to be made. Because there are so many misconceptions about us out there, that it’s no wonder people don’t want to step inside our doors! So much of the world out there assume all us Christians are alike. There are so many that think we are all just a bunch of homophobic, xenophobic, sexist, racist, self-righteous, do-gooders! Now, don’t get me wrong, these assumptions that people make about us are justified. They know that it’s not hard to find Christians that are just like their assumptions. Thankfully, you and I know, not all us Jesus followers are like that. So, how do we make sure that people know that though?

Well, one way is to ask that scary question. When was the last time that you asked your fellow Auburnites, “Who do you say that we are?” Has Bethlehem ever done that? Like most congregations, probably not. We’ve never had to before. We’ve always had enough people naturally come through our doors, enough to pay the bills anyway. Well, as you can see, those days are gone. Oh, pastor, why do you have to be such a downer? Look, everyone is always asking pastors how to grow the church, right up until they answer. Then they never ask again because they don’t like the answers! But, I don’t see this as a downer at all though!

God has given you the opportunity to go outside these four walls and meet some of your amazing neighbors! Not only that, but God doesn’t send you out there empty-handed, but with good news to share! The greatest news the world has ever heard! Three simple words, “God loves you.” Period. Just as you are, strengths and weaknesses, “God loves you.” Those three simple words could be all that’s needed to help someone rethink what they’ve assumed about us Christians. But, we’ll never know of any misconceptions out there, unless we ask, unless we ask that scary question, “Who do you say that we are?” Do we have the courage to do that? Are we brave enough? Do we love enough? I wouldn’t ask you if I didn’t think so. Thanks be to God. Amen.

Email ThisBlogThis!Share to TwitterShare to FacebookShare to Pinterest
Labels: i am, jesus, john, mark, misconceptions, politicians, question, scary, sermon, statements, transfiguration, vulnerable, who do you say that I am