We Learn By Doing

We are now four chapters into the Gospel of Mark and he finally shares with us some of Jesus’ lessons that he taught his followers. Up ‘til now, Mark has been more focused on what Jesus was doing, not so much on what Jesus was saying. But all that changes in this chapter where Jesus sits his followers down for some good ol’ fashioned lessons from the master. Can you imagine how excited they were? I mean, after all, this is the chosen one of God, the savior of the world, and he’s finally gonna teach a Sunday school class! Or I guess it would be synagogue class? Whatever they called it, the moment was finally here! I can see them sitting down, ready to take notes, wondering what he would teach them! Only for them to be completely let down when he finally does!

He tells them a story that has come to be known as the Parable of the Soils, of the soils! Not the most exciting of stories! Not only that but they are completely perplexed by it! So much so that they ask him later to explain it! Now, that might not seem like a big deal but if I preached a sermon one Sunday, and you all came to me and asked me to explain it, I would be sure that I had failed at that sermon. But not Jesus, he does his best to explain and then continues to teach. He tells them another story, in spite of the lackluster reviews from the last one, and this story is about, wait for it, lamps and baskets! Maybe now we know why Jesus didn’t write any of the books of the Bible!

Lamps and baskets. Anyway, the next story is about how a seed grows, and then he gets really spicy and tells them a story about a mustard seed! Did you see what I did there? Spicy…mustard? What do you expect from me? Jesus isn’t giving me much to work with here! In addition to these being some of the most boring stories any savior of the world had ever taught, they don’t seem to understand any of them! Not even his closest followers, the twelve, understood them! I can see their bursting excitement slowly deflate with each and every story, ‘til they finally put their notepads down, feeling disappointed, if not altogether dumb. This is what they had been waiting for? Just to be made to feel stupid for not knowing what in the world Jesus is talking about?

Two thousand years later, people are still debating on what Jesus meant by these and his other parables, leaving us just as frustrated as his original followers were. And that’s what I want to focus on today. Besides, you’ve heard plenty of sermons that have attempted to explain these parables anyway, some of them probably from me I’ve been here long enough now. But what struck me was not only the confusion of his followers but how Jesus doesn’t exactly help them out either. Even when he attempts to explain they still seem a bit stumped. He even asks them, “Don’t you understand?” He could see it all over their faces. No, they didn’t understand. And in what seems like a move that lacked greatly in the compassion department, Jesus just keeps forging ahead in his lesson plan.

What do we do with that? Because being confused by Jesus is nothing new, right! We are constantly confused and frustrated by Jesus! We are constantly asked to do or believe things that seem to not only go against our grain, but don’t seem to make a whole lot of sense either! Love our enemies? What? Even when they deliver death threats to us? Feed the hungry? Even when they’re probably gonna go and buy a beer instead of food? Forgive so we’ll be forgiven? Even when the pain still hurts? Being confused and frustrated by Jesus is nothing new! So, what do we do with that? Well, my suggestion is to do what Jesus did, just keep moving forward, just keep moving. Or in the words of the ever-wise Dory, “Just keep swimming. Just keep swimming. Swimming. Swimming.” 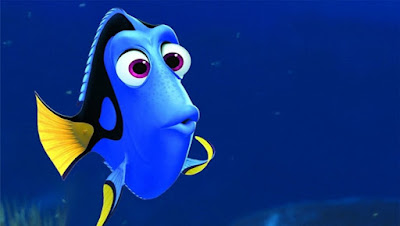 I’m not one of those people that needs all the answers, I like a bit of mystery on my faith! I don’t need to know how everything works. I don’t need to know what’s behind the curtain. But that doesn’t mean that I’m never frustrated by Jesus, that doesn’t mean that I don’t have my moments when Jesus just utterly confuses me, moments when Jesus asks me to do or believe something that makes absolutely no sense. In those moments, I think this chapter, and Dory, have some great advice. And that’s just to keep moving, or keep swimming. In this chapter, I hear Jesus and Mark telling us that answers aren’t everything! That sometimes, our faith is more experiential, than knowledge-based. In this chapter, I hear Jesus and Mark calling us not to understand, but to just follow. Just follow them on the journey.

Which is also a call to trust. I hear Jesus and Mark saying, “Trust us, even though this might not make any sense right now, even if it goes against your instincts or what you’ve been taught before, just trust us, and see where this goes.” Sometimes faith is something you have to experience before it can really make any sense to you. At the end of the movie, Finding Nemo, Dory learns that she isn’t alone.

At the beginning of her story, she has some memory problems that caused her to live a lonely life because she couldn’t remember who was who, but by the end of the movie, she not only has friends but has a family. But if someone had told her that at the beginning of the movie that wouldn’t have made any sense and she would have never believed you. It was something that she had to experience.

This also reminds me of the movie The Karate Kid. Remember how Mr. Miyagi made Daniel paint the fence and sand the floor, and Daniel gets frustrated because he just wanted to be trained in Karate, only to discover that those were the lessons? But in order for Daniel to get there he just had to keep moving forward, had to keep doing what Mr. Miyagi was asking him to do, even if it didn’t make sense, even if it was frustrating and confusing. And that took a healthy amount of trust on Daniel’s part. I believe that this is what Mark is trying to point out in this chapter. Faith isn’t about having all the answers. It isn’t even about searching for the answers. Sometimes, it’s just about moving, swimming, following, doing what Jesus asks, and then seeing what happens.

I find a tremendous amount of grace in that. For me, that takes an enormous amount of weight off my shoulders, to know that I don’t have to find all the answers, that that isn’t even the point of all of this, that it’s enough to just keep moving, and maybe faith will make more sense down the road, and maybe it won’t. Either way, it’s ok. Mark knew where he was going with this story. And talk about an ending that doesn’t make any sense!

Well, I don’t want to spoil the story for you but let me just say that this confusion, this bewilderment, never ends. And that might not sound like good news to you but to Mark it was. And I think that’s because it meant we weren’t alone in our frustration in not having all the answers, it meant that we had a family, even if it’s a family of a bunch of confused people, confused people who love Jesus and is loved back. Granted, it’s a weird kind of grace, but maybe that’s why I love Mark so much. Amen.