Our God-Given Weapons of War 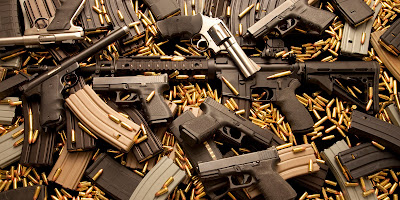 I don’t like guns. No, that’s putting it too lightly. Guns scare the you-know-what outta me! And I know where I get it from. I get that from my mom. She disliked guns so much, I wasn’t even allowed to make the shape of a gun with my hand! I’m feeling guilty just doing right now! Somewhere in northwestern Washington State, my mom’s spidey senses are tingling right now, and she’s probably thinking, “What is my son doing now!” Anyway, to this day I have the same distaste for firearms.

I have friends, who call themselves “gun enthusiasts.” I have a hard time just wrapping my head around that phrase. And they know about my aversion to guns so we just don’t talk about it. Because they know that I’m one of those people that if we woke up tomorrow and every gun in the world had just disappeared overnight, I’d be totally ok with that. But, I’m not a “gun enthusiast” so that’s easy for me to say.

By now, some of you are probably thinking, “Where in the world is pastor going with this! Did he hit the communion wine already?” No. It’s non-alcoholic wine anyway. In our reading today, Paul ends by talking about weapons and so that sent my mind in a whirlwind of ideas about weapons. Paul’s letter to the church in Rome is a fascinating letter. It doesn’t take you long to realize that there were some issues going on among those Christians.

And Paul was doing his best, from afar, to both encourage the good work they were doing, while also correcting some things that were tripping them up. And like humans of all times and places, they were struggling with the question of, who is in and who is out, who does God love and who does God not love? We’ve covered those questions over the last two Sundays, and now Paul is starting to get into more of the nuts and bolts of our faith.

Questions like, how are we supposed to treat other people now that we know God loves us, and now that we know that there’s nothing we can do to earn that love? And does knowing that change anything? Paul’s answer to that question is an emphatic, “Yes!” It most certainly changes things! It changes you! Or at least it’s supposed to! How can it not?

Have you ever known someone who, for no real reason at all, you just don’t like? They haven’t really done anything to you but they’re just someone you don’t really want to spend time with or maybe they just rub you the wrong way but again, they haven’t done anything negative to you? Please tell me I’m not alone in this! And then, this person pays you the nicest compliment that a person can give! And then you’re like, “Oh crap, now what?” It’s so disarming, isn’t it? All those thoughts and feeling that you had about that person just kinda melt away right before your eyes, or at the very least, they now seem so unimportant.

That’s the kind of change that Paul is trying to get at here. Even though God had been saying it for millennia, through Jesus God definitively communicated to the world, “I love you. All of you. Period.” And then the world let out a collective, “Oh crap, now what? I mean, thank you God for loving me but, you love him too? And her? Everyone? Well, now what am I supposed to do with all these thoughts and feelings I had about them?” That’s the kind of change that Paul is getting at here. I mean, if the knowledge that God loves even him, or her, whoever that may be for you, doesn’t change you, doesn’t change your behavior or thoughts or feelings, or anything, then, I don’t know, check your heart, make sure there’s a beat in there somewhere. Ok, that might have been a bit harsh, I may have crossed the line there.

Ok, let’s get back to guns, there’s a phrase you don’t hear in a sermon every Sunday. Weapons, Paul has weapons on his mind. Paul writes, “Don’t offer parts of your body to sin, to be used as weapons to do wrong. Instead, present yourselves to God as people who have been brought back to life from the dead, and offer all the parts of your body to God to be used as weapons to do right.” Now, here’s the thing I want you to notice there. Paul doesn’t say to put your weapons away. Paul doesn’t say that weapons are bad. Paul isn’t my mom, right? No, Paul wants us to use our weapons wisely. Or, maybe a better way to put it would be, Paul wants us to use our weapons lovingly. But before we can get to that, what weapons do we use unwisely, or unlovingly?

Because if it hasn’t clicked by now, we’re not talking about those kinds of weapons are we? However, we are all carrying weapons though, aren’t we? We are always packing, everywhere we go. So, what kinds of weapons am I talking about? Well, we use words as weapons all the time, don’t we? Either in person, or behind others backs, or behind the safety, or should I say, behind the cowardice of our social media accounts. Ooooh, that one stings pastor! Stop! Hey, I’m guilty of it too! I’ve lost friends that way! What other weapons do have in our arsenal other than words? How about our silence. Maybe, not speaking up in the presence of some evil or injustice? What else? How about our wallets? How many people have you known who have decreased or stopped giving to an organization or church because they’re angry at something they did?

Ok, I’ll stop there. Point is, we have so many weapons at the ready and we use them quite often for not-so-good purposes. In our reading today, Paul urges us to flip the script, in regards to our weapons. Paul says, how about we try using them for good? How about we try using our words, for instance, for fighting injustices we encounter in the world? That could be going to a protest, or sharing something on social media, or as simple as treating a homeless person you come across like a human being and not a statistic.

And how about our silence? How can we use silence for good? Well, the easy answer to that is, knowing when to just shut up when we want to say something unkind! But it can be used in other ways too. Like having a moment of silence to remember victims of a natural disaster or mass-shooting like we too often do here. Or, using our silence to pray for our enemies. Or how about visiting someone you know is struggling and then just sitting with them to listen? Silence can be a powerful weapon of love to battle loneliness.

Ok, you don’t need some pastor telling you how to use all your God-given weapons to make this world a better place for others to endure. Be creative with these and the many other weapons of love that have been gifted to you. And the great thing is that you’re never too experienced or inexperienced to use them. Here’s the bottom line, according to Paul, Jesus died to show you how much God loves you, and Jesus rose from the dead to show you just how transforming God’s love can be for us. So transforming, that it can turn our weapons of war, into weapons of love and hope and life. Thanks be to God. Amen.