Between now and Pentecost we will be exploring Paul’s letter to Rome. Aside from the Gospels, it is arguably the most important Christian document found in our scriptures. As many of you know, and like to tease me about, John is my least favorite Gospel writer. Well, if you thought I have issues with John, I have even bigger issues with Paul. He and I have gone the distance on many occasions, both of us walking away a bloody mess, think Rocky and Apollo Creed. I hope I get to meet him someday, and if I do, you better believe I’m gonna bring my boxing gloves with me! Paul is just infuriating!

He’s like a younger sibling who’s smarter than you, and he knows it! And he comes off as entitled and snobby and worse yet, judgmental and condemning! It’s always his way or the highway! Never willing to give you any wiggle room! And I’m not alone, pastors and scholars have had issues with Paul since day one. One of his more outspoken detractors was Ernest Renan, who in the nineteenth century wrote this:

“After having been for three hundred years the Christian doctor in an eminent degree, thanks to orthodox Protestantism, Paul seems in our day near the end of his reign: Jesus, on the contrary, is more living than ever. It is [not]…the Epistle to the Romans which is the [summary] of Christianity, it is the Sermon on the Mount. True Christianity, which will last eternally, comes from the Gospels, not from the Epistles of Paul. The writings of Paul have been a danger and a stumbling block, the cause of the chief faults of Christian theology. Paul is the father of the subtle Augustine, of the arid Thomas Aquinas, of the somber Calvinist, of the bitter Jansenist, of the ferocious theology which condemns and [predestines people] to damnation.”

In the theological world, the appropriate response after reading that is, “Damn, Ernest! Calm down man! You’re gonna give yourself an ulcer!” This is but one of many negative responses to Paul over the centuries. And yet, this letter to the Christians in Rome contains some of the most beautiful Christian writing anyone has ever written. He’s one of those odd characters that can make you want to punch him in the face one minute, and bring you to tears the next minute with his profound words that get you right where it counts.

It’s no wonder this letter remains one of the most influential writings found in our beloved Bible. Now, usually when a pastor talks about the first chapter of Romans the topic is about God’s faithfulness versus our faithfulness but we’re gonna do that next week. And besides that, something else caught my eye this time.

I was really moved by Paul’s words concerning our faith together as a community and how that’s supposed to work. But first, a story, and this one comes from my own life and the life of my oldest daughter Jonah. The teenage years were rough on her. You couldn’t pay me enough to go back to my own teenage years but compared to hers, mine seem like a cakewalk. We talk about those years every once in a while, more and more actually, the older she gets the more she processes I suppose. I called her the other day to ask her for permission to share any of this and she agreed right away, she’s just the kind of person who is willing to help in any way she can, especially on behalf of those who have had similar struggles.

So, I told her about this song that was important to me during that time in her life. As a parent, you walk with your children through the fires that they walk through, and, as many of you know, you don’t walk out of those flames unscathed either. So, the song that got me through those years is called Peace by Depeche Mode, an 80’s band, I grew up in the 80’s, don’t judge me. The song has a refrain that is repeated over and over. Peace will come to me; peace will come to me. And it sounds kinda liturgical, which might be why I like it so much.

I remember listening to that song over and over in the car, as I thought of what our Jonah was going through—feeling helpless, feeling frustrated, feeling anything but peace. And so, that refrain became a mantra of sorts, peace will come to me. And that mantra became a prayer. And then a curious thing happened. I realized that I was not praying for peace for my own sake, but for Jonah. And more than that, I was praying it on her behalf, because I knew that she wasn’t in a place where she could pray that for herself, and so I did it for her. Peace will come to me. Peace will come to me. Peace will come to me. I hadn’t shared that with her til this past week and she told me that it just happened to be one of her favorite songs as well. Ok, so what does this have to do with our reading from Romans?

Paul writes, “I pray for you constantly. I’m always asking that somehow, by God’s will, I might succeed in visiting you at last. I really want to see you to pass along some spiritual gift to you so that you can be strengthened. What I mean is that we can mutually encourage each other while I am with you. We can be encouraged by the faithfulness we find in each other, both your faithfulness and mine.” 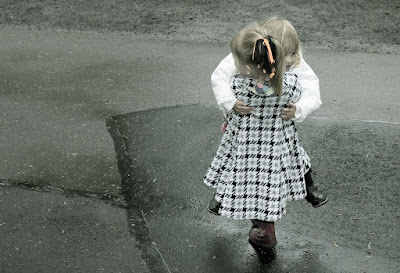 Here’s how I hear that. We can’t do this alone. We were never meant to do this faith business alone. Our hearts are not wired to do this alone. We need each other. Especially because, as many of us know all too well, that there are times in our faith lives when faith becomes too heavy to carry alone. Those times in our lives, as my Hebrew professor would say, when stuff happens, only she wouldn’t say “stuff.” Those times when life makes faith seem silly, illogical, a waste of time, or like it’s failed you.

It’s in those times that our community of faith becomes a lifeline, when those around you carry your faith on your behalf, pray on your behalf, sing on your behalf, when you simply cannot for whatever reason. I think we do this for each other all the time, even if we don’t quite articulate it this way, or openly talk about it. Think of the way your faith community rallies around someone who is going through something. Maybe it’s a cancer scare, or worse. Maybe it’s the death of a loved one. Maybe its spousal issues, child issues, parental issues. You name it, the church was built to carry each other, and the world, through this life. Unless of course it’s the church that is the problem but that’s for a whole other sermon!

Instead of saying, “Got your life in order? Then this is the place for you!” we would say, “Is your life a mess like ours? Then this is the place for you.” Can you imagine a church that wants others to join them not to fill their offering plates, not to fill their pews, not to fill our sign-up sheets, but because we need them to walk with us, and not because we think they need us, but because we need them by our side through both the joys of this life and the heartaches of this life. Can you imagine a church that vulnerable, that honest? As much as Paul might grate on my nerves, I really do believe that this is the kind of church that he hoped for us. And as we just got done reading through the Gospel of Matthew, we know that Jesus did. Thanks be to God. Amen.