Last Sunday we wrapped up our journey through the Hebrew scriptures with a passage from Isaiah. The prophet encouraged us to persevere, even though it had been a long and winding road, because God had not forgotten the promise to be our God through thick and thin. And Isaiah ups the ante with another promise, a promise that God’s very own servant would bring justice to this world, with us, and do it through peace, not by force.

Not what they were expecting to hear but if that journey through those ancient stories taught us anything it’s that God is full of surprises, am I right? God does what God wants to do. God fulfills promises however God wants to fulfill them. God doesn’t have to follow any rules! You’d think by now, we’d have figured that out. And I know that many of you know exactly what I’m talking about because I have heard so many stories from you, about the amazing and surprising ways that God has worked in your lives, answering prayers in the most unexpected ways.

However, sometimes when God does that, it’s not all roses and tulips, as is the case in our reading for today from Matthew. Before we get into that, one thing that I really love about Matthew’s telling of Jesus’ birth story, is that he tells it from Joseph’s perspective. Luke’s telling of this story is from Mary’s perspective and that’s the story that we always read, every year on Christmas Eve in fact; including tomorrow night. But we only read Matthew’s version every three or four years and so it isn’t quite as popular. And as such, Joseph usually takes a back seat this time of year, which is ok, Lord knows that the men of this world have had their share of the spotlight. But this story of Joseph is pretty profound, and so I’m glad we get a chance to talk about it.

So, speaking of surprises, Joseph gets a doozy in this story! Here he is, engaged to be married to a wonderful young woman; he’s planning his life out like any of us would; supporting his young family with his carpentry business; life is good for Joseph. And then bam! Mary gets pregnant, and he knows the baby isn’t his. His whole world fell to a pile of ashes at his feet. And like many of us, he thought, well, that’s that. It’s over before it even began. You see, according to Jewish law, the punishment for adultery was execution by stoning. But Joseph could not allow that. So, he devised this plan where he would leave her quietly. Just walk away. Dreams crushed. Say goodbye. Call it a day. And so, Joseph goes to bed that night, to begin dreaming new dreams, of a different life than he had expected. 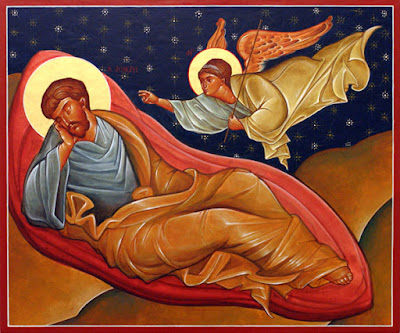 And you know, can I just stop there and say that it’s in instances like this, that God really shines sometimes isn’t it? When life has had its way with your dreams, crushed them, pulverized them, and you see no hope, that’s often when God steps in and says, I’ve actually thought of something that you haven’t—believe it or not!—If you’ll just hear me out. And that’s what God asks Joseph in his dream that night. God knows that this isn’t the dream life that Joseph had planned but if Joseph will just hear him out, there are things at work here that he’s not aware of, and so God let’s Joseph in on some insider information. That in fact, Mary had not cheated on him, but the child was put there by God. And God had big plans for this baby. And Joseph got to be a part of that, if he wanted to.

Because Joseph could have said no. He could have said, you know, thanks but no thanks God. I’ve had about all the drama I can handle right now. I’m good. That’s what I would have said. But not Joseph. However, I would have loved to see the look on his face as he woke up from that dream! Was his expression that of pure terror? Relief? Heavy responsibility? Shame? All of the above? Regardless of his expression, he got up from that dream that morning, and said, ok, let’s do this.

It’s not the life I had dreamed for us, but if raising someone’s else’s baby is what I’m being asked to do, then so be it. And I don’t mean to over-sentimentalize this story but, it’s hard for me to read this story and not believe that Joseph was able to say yes to this dream of God’s, because he loved Mary. That this was not just an arranged marriage, this was not just two people carrying out a societal norm, but in order for him to go along with this plan, he must have already loved her, deeply.

I believe Joseph is one of those rare male characters in the Bible, who is just a plain ol’ good person, through and through. So many other male characters in the bible force us to overlook characteristics about them, certain behaviors, attitudes, etc., but with Joseph, other than his plan to quietly leave her, which I personally don’t hold against him, he provides a great model for us, of how to love someone, unconditionally.

There was a lot that Joseph had to look past in order to love this new family that he found himself in. He had to look past the fact that this baby was not biologically his. Mary could have easily been a constant reminder of the life that he had dreamed but now lost, every time he looked at her, if he allowed himself to. This act of love on his part was a conscious, intentional, sacrificial, act of love. And I have to wonder, if it was that kind of love, from both his parents, that allowed Jesus to take on the cross so lovingly.

But back to Joseph, the other thing that I really wanted to point out from what he can teach us about love, is the way that he was able redefine what family meant. He took this baby in as his own, even though it was not his blood. And I don’t think I have to tell you how being a blood relative is important to humans. It was just as important in Jesus day as it is today. Whether you’re talking about family inheritances, or who is eligible for the throne, being a blood relative has always been extremely important to us humans.

I’m sure there is a scientific explanation for that but I’m no scientist. Point is, none of that was more important for Joseph than this call to raise this baby as his own, to call him family, and to be the best dad and husband that he could be. And this was an important lesson for him to learn because this baby, this savior of the world, this ruler of the cosmos, wrapped snugly and lying in a manger, did not just come for his family, or the Jewish people, but for everyone.

As you continue to chew on this throughout your upcoming Christmas celebrations, I want you to consider how you define family. Who do you include? How does one become eligible to be included in your family? What are the prerequisites? What is different about the way you love those whom you consider family and those whom you do not? And more importantly, is there something you can learn from Joseph about how you define family? In other words, however wide your definition of family is, are you able to widen it just a bit? Can you dream of a world where all our definitions of family became a little wider? Can you dream of that happening on a global scale? God invites us into this dream. And if we’ll just hear God out, maybe we can wake up in the morning, and like Joseph, say, ok, let’s do this. Amen.