As you may have picked up by now, I love stories. Whether they be in the form of a movie or TV show or book or play or whatever. I love a good story. Now I can be pretty critical of stories. So what makes a good story in my mind? Well, lots of things: a good story has to have characters that make me care for them. In other words, if a character dies and it makes me want to cry, then the writer has done their job. I have stopped watching TV shows after realizing that if any of the characters died, it really wouldn’t have an impact on me. What else makes a good story, I’ve mentioned in a previous sermon that I love plot twists, especially ones that I can’t guess. I love it when a writer can surprise me!

I also have to admit that I love a good love story. Any story that has a good love story within it has my vote! I didn’t realize just how much I like love stories until I was ranking all the Star Wars books that I’ve read. Because that’s what your pastor does in his spare time. My pleasure reading is almost entirely made up of Star Wars novels, so I’ve read a lot of them. So one day I’m ranking them and when I got done I looked at the books at the top of the list and realized that my favorite ones, all had good love stories within them! Now don’t get me wrong, there were still plenty of space battles and lightsaber duels but I was surprised at how big a factor a love story was to a good book for me.

So those are some of the things that make a good story for me, but one thing I don’t need for a story to be a good story, are all the questions answered. It drives my wife up the wall when we watch a movie and there are unanswered questions left at the end. And then she’ll ask me as if I wrote the screenplay and I don’t know what bothers her more, the unanswered questions or the fact that I’m ok with them! And there are so many great examples of this: What’s in the briefcase in Pulp Fiction? Does Batman die at the end of The Dark Knight Rises? What was in the FedEx box in Cast Away? What’s the man with no name’s name in The Good, the Bad and the Ugly? Why doesn’t Chewbacca get a medal at the end of A New Hope? Ok, now that one, that one is still stuck in my craw! I’d really like George Lucas to answer for that one!

Now, this is more than just liking a good mystery though. What I’m saying, is that not only do I like a good mystery, but that the mystery doesn’t need to be solved for it to somehow be complete. I don’t mind it when a writer, leaves me to do some of the work at the end of a story. I actually like it when a writer allows me to use my imagination at the end of a story, to fill in the blanks, or to answer the unanswered questions on my own. I like mystery for what it is—the unknown. Because once a mystery is solved, it’s over, it’s no longer mystery. There’s nowhere else to go with it after that. It then ceases to hold that magical power over you that it once did—that power that spurs your imagination, allowing the mystery to come alive.

Ok, by now I’m sure you’re wondering why I’m talking about unsolved mysteries, or maybe you’ve already guessed! Today is that weird day of the church called Holy Trinity Sunday. It’s always the Sunday after Pentecost Sunday and it’s the day when we celebrate the Holy Trinity, probably the most confusing church doctrine of all time! Actually, today should be called Holy Heresy Sunday! Because of all the bad theology that’s being spewed out by pastors today trying to explain the doctrine of the Holy Trinity to their congregations! In our defense, our hearts are in the right place, but when we try to describe the unseen, we’re just going to mess things up. So I say, why even try. Now, in the past, I usually just ignored the fact that it was Trinity Sunday. I’d preach on one of the Bible passages provided for the occasion and call it a day. But this time, I thought it was high time to address it.

But rather than try to explain it and fall down some heretical rabbit hole, I say we just recognize the Trinity as one of the many mysteries of our faith, and proclaim it that way—be ok with it as mystery. Unfortunately, somewhere along the way, our faith was stripped of much of its mystique. Led by a bunch of men that wanted to argue and debate that they were right about everything—surprise, surprise—they ended up boiling our faith down to a bunch of black and white, right and wrong, our way or the highway, doctrines that had a vague resemblance of its original beauty. Which, by the way, is where we get out creeds from. The Apostles and Nicene creeds were born out of those church fights, created not to express the basics of our faith like the church would like you to believe, but rather to keep people out that don’t believe exactly the way we do—to draw a line in the sand. But back to the Trinity. 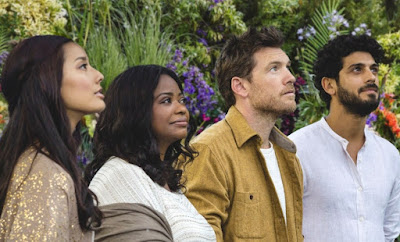 One of my favorite books to wrestle with the doctrine of the Trinity is The Shack by William Young. One of the main characters in the book is, you guessed it, the Holy Trinity, appearing mostly in the form of three people: a black middle-aged woman as the “Father” or Papa as she’s referred to in the book; a young Asian woman as the Holy Spirit; and a thirty-something Middle-Eastern man as Jesus. As you may already have guessed, it is not going to answer your questions about the Trinity, it may even leave you with more questions than you came with, but it’s a fun exercise in stretching your thinking about who and what the Trinity is. In the book, the topic of mystery comes up in a conversation between Papa and another character named Mackenzie or Mack for short, that I’d like to share with you now. At this point in the conversation, they are talking about the crucifixion.

“Don't ever think that what my Son chose to do didn't cost us dearly. Love always leaves a significant mark," Papa stated softly and gently. "We were there together." Mack was surprised. "At the cross? Now wait. I thought you left him - you know - 'My God, my God, why hast thou forsaken me?'" It was a Scripture that had often haunted Mack in The Great Sadness. "You misunderstand the mystery there. Regardless of what he felt at that moment, I never left him." "How can you say that? You abandoned him just like you abandoned me!" "Mackenzie, I never left him, and I have never left you." "That makes no sense to me," he snapped. "I know it doesn't, at least not yet. Will you at least consider this: when all you can see is your pain, perhaps then you lose sight of me?”

Mack learns that things are not always what they seem, and that he should be careful with the assumptions that he makes. In our Gospel reading for today, Nicodemus learns the same lesson. One of my favorite characters in the Bible, it is difficult not to feel sorry for him. He wants so badly to understand what Jesus is talking about. But his academic, logical mind keeps getting in the way. Jesus speaks of being born anew and being born of the water and the spirit, and he immediately thinks of his mother’s womb. “How are these things possible?” he asks. He wants to know how this works, the nuts and bolts of it all. And notice that Jesus never really answers him. Almost as if to say, “You’re just gonna have to trust me Nicodemus.”

And I’d say a good deal of our faith lives revolve around trust. Wouldn’t you? That ability to say, “I don’t know how this works or even if it will work, but I’m still going to press forward, one step at a time.” Those three words, I don’t know, can be some of the hardest words for us to utter. I’m not sure if that’s pride, ego, our American sense of independence, or what, but I do know that it’s something that Eastern religions could teach us a thing or two about. For the most part, they do not have the same hang-ups that we do about the mysterious and the unknown. They embrace it. They “own” it, as our sending hymn for today puts it. The last verse reads, “Holy Father, holy Son, Holy Spirit, three we name you, though in essence only one; undivided God we claim you and, adoring, bend the knee while we own the mystery.”

I get it. It’s very human to want to know all the answers; to want to know how everything works; to want to be able to wrap our logical minds around everything. But there is so much about our faith that we don’t know, that is shrouded in beautiful mystery. Our job is not to try and rid the world of mystery. Our job is to own it, and proclaim it as something beautiful. I don’t know how the Holy Trinity works. I don’t know how to answer a question like, “If Jesus was God then who was he praying to?” I don’t’ know! But do we have to know? I kinda don’t want to know. In the same way I don’t want to know how a magic trick really works. Where’s the fun in that? Own the mystery my friends. Have fun with it. Because the one thing that’s not a mystery, is God’s unconditional love for the world. And that’s all that really matters. Thanks be to God. Amen.