Last week’s sermon was pretty challenging, both to hear and to deliver. So I thought to myself, I’ll go easy on them next week. Besides, I don’t think I got it in me to do that again so soon. So, I sat at my desk, after everyone had gone home last Sunday, only to read today’s Gospel story. Well, that’s just great, I thought, thanks God. Last week’s Gospel story was challenging because even though the good news of the Gospel was explicitly stated, “Now is the time. Here comes God’s kingdom. Change your hearts and lives. And trust this good news,” it wasn’t the kind of good news that we like to hear.

Today’s Gospel story is challenging because not only is the gospel not explicitly stated, but it’s really hard to find any good news here! You really have to dig and sift through this to find something that vaguely resembles good news! But maybe, just maybe, we’re asking the wrong question, searching for the wrong thing. Maybe, just maybe, we’re just supposed to be simply listening to whatever God has to say to us, so that we can be the good news when we leave this place. Hold on to that thought, we’ll return to it later.

So, our Gospel story for today, comes immediately after Peter’s declaration that Jesus is the Christ, not just a prophet, not just a good teacher, but the Christ himself. Jesus says let’s not go around sharing that right now. And that’s where our story picks up. And Jesus goes on this very depressing rant about being rejected and killed and rising, and then he calls Peter Satan and he doesn’t end there, he tells them to take up their cross or else they too are going to die.

All of a sudden Jesus turns into a negative Ned. That’s the male version of negative Nancy. We all have one of those in our circle of friends right? That friend who always sees the glass half empty, who sees the negative in everything and just has to comment on it, you know, the Eeyore of the group. And I’m sure his followers were like, where in the world did that come from? Somebody woke up on the wrong side of the bed!

But of course, it was much more than just his attitude that was troubling them, but it was his words. This is the first of three times in the Gospel of Mark that Jesus predicts his own death. And Peter takes hold of him, meaning that he faces him, looks at him, and in so many words says, No! Not gonna happen! I don’t want hear this! Good ol’ Peter, we can always count on Peter to say what’s on everyone else’s mind right? And Jesus gives it right back to him, looks him dead in the eye and basically says, No! You don’t know what you’re talking about! Your head is in the wrong place Peter! With some name calling thrown in there too but we don’t need to go there. But in this exchange, between Peter and Jesus, they are speaking, out loud, one to another, some hard truths. Peter could not accept what Jesus was saying, and had to speak up about it. Likewise, Jesus could not ignore the cross, looming ever closer, and had to speak up about it. And both were speaking up out of love for each other.

I’m sure most of you can relate to them. I’m sure there have been times in your life when you have had to speak a hard truth to someone. And even though it’s done out of love, that doesn’t make it any easier does it? If anything, it makes it harder! Maybe it was a wrong that someone inflicted on you that needs to be addressed. Maybe it was a friend or family member that you see going down a path that will surely lead to no good and you just can’t bite your tongue any longer.

Or maybe it’s something seemingly simple like asking for help, or saying no when asked to do something when your heart just isn’t into it. Or maybe something bigger, like speaking out against an injustice. Hard truths come in all shapes and sizes. But a hard truth about hard truths is this, they’re never silent, otherwise they wouldn’t be hard. No, they are said openly, plainly, as Jesus lovingly did with Peter, as Peter lovingly did with Jesus.

Now, there are a few different ways you can take this sermon on hard truths. You can take this on an individual level. I think that’s the default anyway right? When you listen to a sermon it’s natural to think how it applies to you, and there’s nothing wrong with that. So taken that way, you could ask yourself some challenging questions like, what hard truth is God trying to communicate to me? How have I resisted or dismissed it? Have I outright told God, as Peter did—No, I’m not buy’n it; there must be another way!

What does this have to say to you as a congregation? What hard truths have been spoken to you in the past O Bethlehem, and how did you come out on the other side of that? You’re still here. You’re still standing! You got through it. Have those hard truths come from God? From other people? From both simultaneously? And how did you initially react O Bethlehem? With defensiveness? Dismissiveness? Anger? Hurt? Sadness? Did you eventually take that hard truth to heart? Or maybe it’s still ringing in your ears. These are important questions because it will affect how you respond the next time a hard truth is spoken to you O Bethlehem. And there will be a next time because thankfully the Holy Spirit never stops speaking! And she speaks both words of comfort and hard truths.

Now let’s flip this around. What hard truths do you feel God calls churches to speak to others? For example, churches are speaking hard truths concerning whether or not they will fully welcome those from the LGBTQ community. And no matter where they fall on that issue, it’s going to make them unpopular with those who don’t agree with their version of the gospel. Does Bethlehem have anything to say about that? There are churches speaking hard truths about the injustices against our black communities.

And no matter where they fall on that issue, it’s going to make them unpopular with those who don’t agree with their version of the gospel. Does Bethlehem have anything to say about that? There are hard truths being said right now about guns in this country. And no matter what side they come down on, they’re going to be unpopular with those who don’t agree with them? Might the church have something to say about that issue? Does the gospel shed any light on that issue? And if so, who will speak it?

And so another hard truth about speaking hard truths, is that they don’t make you very popular. Why? Because they often hurt, both the hearer and the speaker. I would imagine that Peter and Jesus walked away from that exchange hurt, scarred, confused, angry, or all of the above. When you have had to speak hard truths to people, I’m sure you have received a whole bunch of different reactions! And “thank you” is probably not one of them! At least not initially. When you speak hard truths to people they can feel attacked, and get defensive. Seminaries should probably have standard issue body armor to hand out at graduation because of this! Because I don’t care how thick a new pastor thinks their skin is, I can guarantee them, it ain’t thick enough! 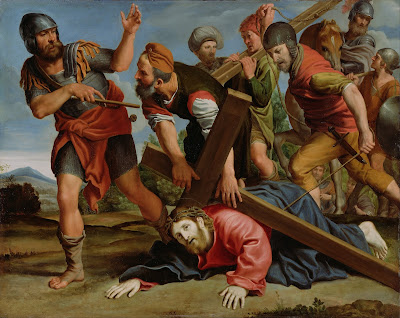 Jesus spoke hard truths, and it got him rejected, arrested, beaten, and executed in a most horrific way. That was, quite literally, his cross to bear. And it’s a heavy cross, as seen here in this 17th century painting by Italian artist Domenichino. He called it, The Way to Calvary. And for me, it’s not the cross or the soldier or the angry faces that strike me about this painting. What I find particularly haunting about it, is Jesus looking at us dead in the eye, as if to say, “Be sure you know what you’re getting yourself into. Because this, this, is what speaking hard truths looks like, this is what following me looks like.” We will be laughed at, insulted, mocked, utterly rejected, by many. This is not about winning a popularity contest. This is about the good news of the gospel, and as we heard last week, the good news doesn’t always sound like good news to everyone. Sometimes not even to us! Because the gospel often calls us to speak hard truths that need to be said.

Now, there is good news to be had in all of this. I won’t leave you on that note! The good news is what comes from this hard truth telling—life. Jesus doesn’t speak only of his death but also of his rising. And if we are called to die with Christ in our baptisms then we are also called to rise with Christ out of our baptisms. And Jesus didn’t only speak of us losing our lives, but also of saving them, by being willing to take up our own cross, for the sake of the world around us, by being willing to be rejected, by sticking our neck out for others even when its unpopular, by speaking hard truths that need to be said, even when the cost is high, especially when the cost is high. Jesus does not just look at you in warning, but also looks at you with yearning in his eyes—yearning for you to join him, on the way to Calvary—carrying that heavy cross of rejection, for the sake of the gospel, for the love of the world. Thanks be to God. Amen.
Email ThisBlogThis!Share to TwitterShare to FacebookShare to Pinterest
Labels: behind, black, carry, cross, good news, gospel, guns, hard truths, jesus, lgbtq, life, mark, out loud, peter, rejected, satan, sermon, speaking, take, world