Happy new year! Don’t panic! You didn’t miss December. As the first Sunday of Advent, today marks the beginning of a new church year, in which we travel through the story of Jesus from beginning to end and beyond. Last year our Gospel readings came from Matthew and this year they will come from the best Gospel, Mark; with some John sprinkled throughout for good measure because the Gospel of Mark is so short—and because John just likes to butt in where he’s not wanted. I may have mentioned before that John is my least favorite Gospel. Anywho.

Now, you’d think that we’d start at the beginning of Mark but no, like every first Sunday of Advent, we begin at the end, no not the end of the Gospel, but at the end of all things, at the end of time itself. You see Advent is not just to prepare for the celebration of the birth of Christ, but it’s also the time of the church year when we prepare for the second coming of Christ as well.

And there are many scholarly reasons why we do this every year on this Sunday, but my own take on it is this. As we embark on this journey once again, as we take these first steps of Jesus’ life with him, we know that this road is going to be a bumpy ride. We know, as people on this side of the cross and empty tomb, that this road will not be all roses and tulips, but will take some very dark turns—and with the disciples, we will experience their hopelessness, confusion, and despair, as Jesus’ life doesn’t turn out the way they expected it to.

And for me, the reason why we begin this journey at the end of all things, with Jesus speaking of his return when not even the sun nor the moon light will be needed, is to remind us, to steady us, with the promise that God is ultimately in control here, that God carries the cosmos, which includes little ol’ us, in God’s loving hands.

And therefore, there is no need to fear, all will be made right in the end, regardless of how bumpy of a ride it may seem. So, buckle your seatbelts once again, as we begin at the end. Like last week’s Gospel reading, today’s story from Mark comes right before the events of Holy Week begin—and again, that detail should not be overlooked. Now, how much Jesus knew is up for debate, but he was no fool. If he didn’t know precisely, I’m sure he could sense that his end was near. Tensions were high between him and the Jewish and Roman leadership. So of course, on his mind are endings, and darkness, and death.

Not all that different from us at this time of year. Though the holidays are filled with parties and celebrations, underneath all of that are some of life’s stark realities. Not only are the days darker, which wreaks havoc on those suffering from depression, but we are also reminded of all those whom we have lost, those that we will be missing at our holiday celebrations. And like our lives, the season of Advent is one dichotomy after another: beginnings and endings, life and death, light and darkness, despair and hope. Keep these in mind as we travel together.

And even though Jesus is speaking of the end, it is not all doom and gloom. His words are full of hope and promise, which was the whole point. He knew that if anyone needed words of comfort, his followers soon would, as his arrest was right around the corner. But before we get into that, let me pause and ask, I’m not expecting many hands raised here and that’s ok but raise your hand if you are a Game of Thrones fan. 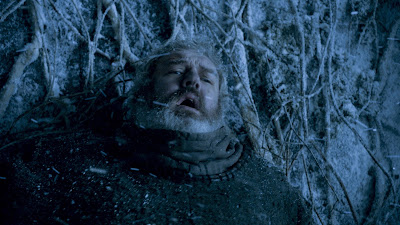 My wife and I are big fans of the TV show. And let me warn you now, if you’re not caught up, spoilers are ahead. And if you don’t watch the show, it’s ok, I’ll explain. So, this reading from Mark reminded me of a particular character from the show named Hodor, H O D O R, Hodor. He’s a huge guy, almost giant like. And for the first five seasons you’re led to believe that he has a learning disability as he can only say his name. No matter what he is trying to communicate all that comes out of his mouth is “Hodor.”

But then we finally learn that he wasn’t born that way, but that he suffered a seizure as a young boy that made him that way. The reason why he suffered that seizure is because he saw a vision of the future, in fact, of his own death. Now I’m not even going to get into how he saw that vision all that’s important is that he did. Seeing his own death was so traumatic, he seized and was never the same again. But it’s a detail about that vision that brought it to my attention when I read today’s gospel passage.

You see, when he saw himself die in that vision of the future, he also saw himself heroically save his friends, and how did he save his friends, by holding a door to keep their enemies from killing them. Enemies that eventually killed him. His friends kept yelling, “Hold the door!” And so, as he layed on the ground seizing, he said that phrase over and over. Hold the door. Hold the door. Hol da door. Ho da or. Hodor. So it turned out, he wasn’t saying his name, Hodor, like most people thought, he was saying hold the door, because in his vision of the future, he died saving his friends, by holding the door.

Ok, hold that thought, as we return to our reading from Mark. A door is mentioned twice in this passage. And the part that I noticed, seemingly for the first time, was toward the end of our reading. Now, if you read this too fast and aren’t paying attention, you might assume that we are the servants that Jesus refers to but that’s not the case. Listen again. Jesus says, “It is as if someone took a trip, left the household behind, and put the servants in charge, giving each one a job to do, and told the doorkeeper to stay alert. Therefore, stay alert!”

In other words, you’re the door keeper! So stay alert! And carry out your duties as doorkeepers. Now, what are those duties? You might hear the word doorkeeper and think of the word gatekeeper. And a gatekeeper is often thought of as someone who decides who gets in and who is kept out.

But by this time in the Gospel of Mark, Jesus has already made it clear, that role belongs to him. Jesus is the one who decides who is in and who is out. And to the consternation of many, as we sung in our opening hymn, he flings that door wide open! So if our job is to not decide who is in and who is out, what is our role as the doorkeeper? To hold the door! Jesus has flung it wide open for the world to enter in and all we have to do is hold the door. That’s it. Well, it’s not as easy as it sounds is it. Because there are many forces in this world that want it shut, otherwise there would be no need for us doorkeepers.

There are those who want to play the role of Jesus and decide who is in and who is out. There are those whose behavior, as “followers” of Christ, shut the door on people’s faces because when they see Jesus’ followers misbehaving, they don’t want anything to with Jesus, and who would blame them! There are those whose inaction, whose complacency, whose act of turning a blind eye to the needs of the world, shut the door. Though Jesus has done the heavy lifting by flinging wide the door to his heart, keeping it open, is no easy task. And like Hodor, it can be a costly endeavor, it can be a sacrificial act. But like I always say, if this journey of faith ain’t costing you anything, then you’re doing it wrong.

The other side of this, are the doors that need to be shut, we won’t get into them right now, but doors like sexism, homophobia, xenophobia, hunger, homelessness—doors like those need shut, forever—and as doorkeepers, that’s our job too. As we journey again this new year, with Christ by our side, through his birth, life, death, and resurrection, may we recommit ourselves to seeking out ways to answer our calling, our calling to be doorkeepers, for the sake of the world, to hold the door, that Christ has flung wide open. Thanks be to God. Amen.