My goodness, we have some tough passages before us today! Violence and destruction from Jeremiah. Being crucified and buried by Paul. Sinking in the mire and swallowed in the Pit according to the Psalmist. Surely Jesus will save us from all these depressing Bible passages! Well, not entirely, does he? Jesus reminds us that God can destroy body and soul in hell, has family members turning on each other, and ends by telling us to pick up our own crosses. If last week we learned that Jesus should not be put in charge of hiring new employees as he is the worst help wanted ad writer, this week we learn that Jesus would not have made a very good motivational speaker, at least not the way we think of a motivational speaker.

So, there’s way too much here for any one sermon to address it all. Which is unfortunate since there are a lot of troubling verses throughout these readings, if taken at face value. Undoubtedly, you will leave this sermon wishing I would have addressed a particular verse but didn’t. I have two pieces of advice for you. One, ask me about it. I love questions! And two, and more importantly, never read a scripture verse in a vacuum. Meaning, no one scripture verse or passage was meant to stand on its own two feet. But rather, needs to be read in light of all of scripture, the brightest of those lights being in the Gospels, being Jesus. Or as Martin Luther put it, “The Bible is the manger that Christ was laid in.” In other words, Jesus is the real gift of the Bible, not the Bible itself.

That being said, let’s turn our attention to our Gospel reading we have before us. There’s a lot here and not all of it follows a very linear path. And that’s simply because the Gospel writers often put a collection of Jesus’ sayings and teachings all together, even if they didn’t happen all at once. So, some passages can seem a bit choppy and this is a good example of one of those passages. Another reason why it’s nearly impossible to address this passage as a whole. So, I’d like to focus on the last third of this passage from Matthew. The part where Jesus says, I haven’t come to bring peace to the earth, but a sword. And then he goes right into some striking family imagery which we will get into in a minute. But first, the sword.

We, of course, usually associate Jesus with peace. And no, we didn’t just make that up, we find that idea throughout scripture—which is why we this passage really sticks out like a sore thumb, and kinda leaves us scratching our head a bit. What do you mean you didn’t come to bring peace Jesus? For many of us, our faith is counting on the fact that peace will come, and it’ll come though Jesus, if it hasn’t already! So what is Jesus really talking about here? And is there a way to find any hope at all in these tough words of Jesus? Let’s try and find out. Swords, may have a lot of different meanings, but I think for most western minds, particularly in America, we see a sword and think, in the words of Jeremiah, violence and destruction.

However, that is not the case for all times and places and cultures. Here’s an example. Sara and I were having lunch with a Sikh family from India a few weeks ago. I, not knowing a whole lot about Sikhism, was pleased to find them very willing to answer any questions we had. It didn’t take me long to notice this symbol throughout their house. And so, as soon as I was comfortable, I finally asked, what does it mean? 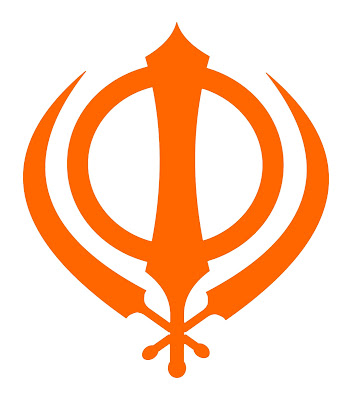 The husband went on to explain that the symbol is the symbol of their religion, called the Khanda, and was actually three symbols in one: a vertical large double edged sword in the middle, two single edged smaller swords on each side, and a circle in the middle. And I think he thought that answer was sufficient but now my curiosity was really peaked! Why three swords and circle? I needed to know more!

But before I share his answer, I have to share what was already going on in my mind, other than my unquenchable curiosity. In my mind, I was thinking, “Wow, how violent! What kind of a religious symbol is that?” And let me give you a little context to that. Sikhs endure a lot of racism and outright xenophobia. As a people whose men wear turbans and grow our their beards, they are often called “Islamic terrorists” or other slurs such as “towel heads.” And so they are constantly having to defend their religion and differentiate themselves. So, with that in mind, my next thought, after “Wow, that’s a violent symbol” was, and I’m being very vulnerable here, “For a religion who really wants to differentiate themselves from violent terrorists, they really should think about marketing themselves differently!”

Thankfully, I was able to snap myself out of that and my next thought was, “Holy cow, where did that colonial elitist thought come from? Shame on me!” So, he goes on to explain the three symbols. The large double edged sword symbolizes the cleaving of truth from falsehood. The two smaller swords symbolize the dichotomy between the spiritual and the secular, and every Sikh’s responsibility to live in both worlds, and the circle symbolizes the eternal God—nothing about violence or war or killing. Like all religions, Sikhs value peace and love and justice in the world. Not usually the things we associate with swords—which leads us to believe that Jesus had something different in mind when he talked about a sword too.

And he did. Like a Sikh’s double edged sword that symbolizes the cleaving of truth from falsehood, Jesus’ sword was more about division than violence—division between people, and not just any people, but the closest of people, family. “…man against his father, a daughter against her mother, and a daughter-in-law against her mother-in-law. People’s enemies are members of their own households.”

That’s how divisive Jesus saw himself to be. And no one was safe from it, not even family. And I think we know all too well, he was right. For many of us, religion is a topic we know we can’t bring up at Thanksgiving dinner, right? Like politics, it’s a topic better left alone. Why? Because it’s divisive. Because Jesus is divisive. Do we still go to Thanksgiving dinner? Of course! Our faith in Jesus compels us to. So, in a weird way, Jesus is also a unifier.

Hardly any of my friends before seminary are Christians. So, out of respect, I don’t talk about religion when I am around them. Why? Because Jesus is divisive. Do we still make the friendship work? Of course. My faith in Jesus compels me to. So in a weird way, Jesus is also a unifier.

A few weeks ago Sara, Grace, and I attended an anti-anti-Islam rally. Word got out that there was an anti-Islam rally being planned in Roseville and so Placer People of Faith Together made plans to be there as well, to show support for our neighbor Muslims. I have never been flipped off that many times in one day, or had that many obscenities yelled at me, especially in my collar! Will we still stand up for our Muslim neighbors again in spite of that? Of course! Our faith in Jesus compels us to. So, in a weird way, Jesus is also a unifier.

Bethlehem is no stranger to conflict. Like most congregations, you have had your share of division over the years. My congregation in Pennsylvania, First Lutheran Church, had two big church splits over their 250 plus year history. The first came when they switched from German to English worship services. Half the church left and formed, you guessed it, Second Lutheran Church, just two blocks down the road!

The next big split came when the church decided to bury a suicide victim in their cemetery. Half the church left and formed, no, not Third Lutheran Church, that’d be silly, they formed Trinity Lutheran Church! Did these experiences make the people at First Lutheran never make another change in worship ever again? Or treat the families of suicide victims with any less grace? Of course not! Their faith in Jesus compels them to be merciful. So, in a weird way, Jesus is also a unifier.

In the same way, the divisions that Bethlehem and other churches have experienced are largely due to being compelled to proclaim Jesus’ grace, even stronger than you had in the past, to bring the church, and therefore Christ closer to the surrounding community. And when people aren’t on board with that, for theological or other reasons, they often leave. Because Jesus is divisive. Does that make us withdraw from proclaiming Jesus radical grace to our surrounding community? I surely hope not! Otherwise I wouldn’t have taken this call!

We don’t withdraw because our faith Jesus compels us proclaim grace to a world that really needs it. And so, Jesus, in spite of his divisiveness, is also a unifier. That’s the hope I want you to hear in this passage. The divisions that we experience, because of Jesus, is a cross we are called to bear, that’s just a reality we have to accept. But, it is not the end of the story. God uses them to open doors elsewhere. Does that make our divisions sting less? Maybe, maybe not. Division is painful, no matter how you slice it. But that pain, is not where God stops working. Thanks be to God. Amen.