Today we have our last of four readings from the Gospel of John in a row. We will return to John at other times of the year, especially during Holy Week and Easter, but these four readings of John really stand out as some of the greatest and most foundational stories in all of scripture. In spite of my love/hate relationship with John, I really have enjoyed these four stories and look forward to them every three years when they show up in our lectionary.

This last story, the raising of Lazarus, is not only a great story, but it is also an important one in the Gospel of John. It is a pivotal story for John, a hinge if you will, that marks a shift in his overall narrative. And here’s how, I’ve said many times just how crafty of a writer John was. Every detail, no matter how big or small, is intentional and meaningful for John, which means that there’s a lot of hidden stuff that may go unnoticed after a surface reading.

Now I’m not saying that John intentionally hid things in his Gospel, but that his mind and writing skills were so complex that it takes a more complex reading. Which is one of my misgivings about this Gospel, you almost have to be a Bible scholar to get the most out of it. However, with a Gospel like Mark, the best of the four Gospels, it is more straightforward, direct, no frills, no bells and whistles, what you see is what you get.

Not so with John, John is going to make you work to get what he is laying down here—and this story is a good example of that. So I mentioned that this was a pivotal story for John. This story literally occurs smack dab in the middle of the book, chapter 11. There are 10 chapters before this and 10 chapters after this. Now, before you dismiss that, keep in mind that everything else about this book seems very intentional, from the order of the stories, to its content and flow, and that John is a big picture kind of thinker.

This leads us to believe that this story is important for John and therefore should be to us. So let’s keep going on this trajectory. Stay with me now. This story, that appears in the 11th chapter, is 54 verses long, I know, another long one, and again, we didn’t even read all of it. And the center of this story, which is at the center of this book, is found at verse 27. And what do we find there?

Martha, boldly proclaiming, “Yes, Lord, I believe that you are the Christ, God’s Son, the one who is coming into the world.” That is the Gospel according to John in one sentence. Guiding people to believe that Jesus is the Christ, God’s son coming into the world is the whole point of John’s Gospel. Unlike Mark, who was content to leave that up to you to discover, John is going to try his hardest to take you to that conclusion himself.

And John does this by showing us what that looks like with story after story of Jesus ministry during his time on earth. Stories like a conversation in the dark of night about being born anew, or a conversation with a woman at a well about living water, or the healing of a man born blind, or a story about the raising of a dead man, just to name a few of the many stories that John used to not only proclaim that Jesus was indeed the Christ, God’s Son coming into the world but also to show us what that even means, and what that even looks like.

In this miracle of the raising of Lazarus, Jesus boldly showed the world that he could not be contained, he could not be held down, try as they might, there was nothing that God could not do through Christ—and that was too much of a threat to them. It was in this miracle that they realized they were dealing with a power greater than they could have imagined, and it had to be stopped. Because if Jesus could breathe new life into a dead body how much more could he breathe new life into the living! 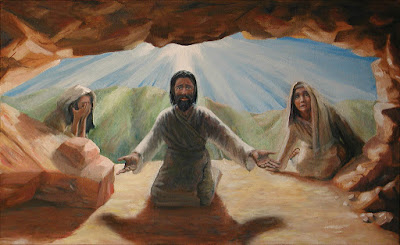 Lazarus, the man born blind, the woman at the well, and eventually Nicodemus, all were blessed enough to experience this new life in Christ during their time here on earth. After their encounter with Jesus they walked away  a new creation because they recognized their need and saw Jesus as the one who could fulfill it. And so it can be, for us. Because John wants you to hear Jesus calling from outside your tomb, “Come out! Be untied, and go.” Thanks be to God. Amen.