So, we continue in the Sermon on the Mount, as we will for two more Sundays after today. Last week we explored the Beatitudes, the sayings of Christ that help us see the world from Christ’s perspective that then urged us to respond in some very particular ways. Today’s reading come right after the Beatitudes, we skip no verses between last week’s Gospel reading and today’s, so the same thought process continues into today. This is the state of the world in Jesus’ eyes, these are the promises that he’s made, and this is how Jesus wants us to respond if we are going to call ourselves his followers. And then over the next three chapters that include the Sermon on the Mount Jesus gives example after example, image after image, analogy after analogy of what that looks like.

But before we get into that vivid imagery from today’s passage, let us deal with the elephant in the room that Jesus provided us at the end of the Gospel reading when he said, “I say to you that unless your righteousness is greater than the righteousness of the legal experts and the Pharisees, you will never enter the kingdom of heaven.” Yeah, that little gem. Now there are a variety of ways that we could tackle this seemingly problematic verse. And maybe this isn’t a problem for you. But this verse, on the surface, implies that a whole hell of a lot of people are not going to go to heaven, and I have a problem with that. That idea does not fit well with my Lutheran theology.

Maybe it does for you, but it doesn’t for me, and you called me as your pastor so here we are. So, as I mentioned, there are a variety of ways to tackle this. We could focus on the Greek word for righteousness, δικαιοσύνη and what that means. Or we could focus on the legal experts and Pharisees and how they relate to all of this. Or we could focus on the Greek word for kingdom, βασιλείαν. But let’s keep it simple, and possibly a little less boring, and remember that almost every time Jesus uses the phrase, kingdom of heaven, he is talking about the here and now—not some other world, in the future, after we die.

So when Jesus says, “I say to you that unless your righteousness is greater than the righteousness of the legal experts and the Pharisees, you will never enter the kingdom of heaven” what he is saying is, unless your willing to get on board, and see the world as I see it, and are willing to work with me to bring about the kingdom of heaven here, than you won’t get to experience it here. How will we be able to experience the kingdom of heaven here if we are not willing to bring it here? It’s really that simple. I’m not dumbing it down for you, I’m not oversimplifying it, that’s really all there is to it. Could we make it more complicated, sure. Would that add a little more depth and nuance. Sure. But there’s just no need. And we need to move on.

Today’s portion of the Sermon on the Mount gives us this beautiful imagery of salt and light. This is one of my favorite passages to read to a congregation because I get to look you in the eyes and say you are the salt of the earth, you are the light of the world—especially the title light of the world, that we usually reserve for Christ, but here he calls you the light of the world, and the salt of the earth. Now I know that many of you have heard lots of sermons on this passage, but just as a quick reminder, salt was highly valued in the ancient world—it was difficult to mine, difficult to process, difficult to transport, but was used as a preservative, for healing purposes, for dietary needs, not to mention the fact that it makes food taste better!

And as far as light goes, I don’t think I need to remind you of all the beautiful and life giving uses of light in our lives. Jesus uses these images to help us understand our role as baptized children of God, and the way in which we are to live that out and bring the kingdom of heaven, the power of heaven, the ways of heaven, here on earth, as coworkers with Christ. However, another motto that I live by is from Ralph Waldo Emerson, a 19th century American essayist, lecturer, and poet who urged “moderation in all things.” Moderation in all things—which got me asking, can we take our role as the salt and light of the world too far? Can we be too salty? Pun intended. Can our light become blinding to others or ourselves? 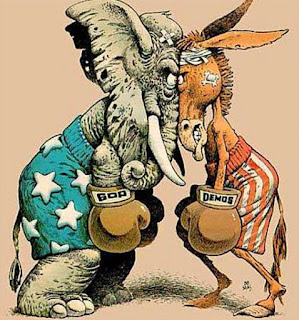 Now, you may be wondering why pastor is asking such strange questions. Well, I think a lot of it comes from the current political climate. Ha! The word climate doesn’t even begin to describe it. It’s more like political storm! And if this wasn’t a sermon I’d use more colorful language to describe the kind of storm this feels like! But don’t worry this sermon is not going to be about politics, at least not in the way you may be fearing right now. It’s more about the polarization that the nation is facing today.

I’m seeing and hearing people say such hurtful things to each other, or about each other. Sometimes it’s online, sometimes it’s in person. Sometimes it direct, and sometimes it’s generalized comments about a certain group of people. I see and hear it between people on opposite sides of the aisle but also between people on the same side of the political spectrum! Conservatives telling fellow conservatives that their not conservative enough and liberals telling fellow liberals that their not liberal enough! It’s madness! Some are saying that this is the most polarized that we’ve ever been as a nation. I’m not sure if that’s true, we’ve had some pretty polarizing events in our history, the civil rights movement and the civil war come to mind, but it’s probably pretty close.

Worse yet, the effects of this are being felt in the church. And I don’t mean between denominations, and I don’t mean just within the ELCA either. I mean that the effects of such polarization are being felt right here at Bethlehem Lutheran Church! I have the honor, responsibility, and challenge, of being the pastor at a church that is filled with people of all walks of life, and that means people on both sides of the political spectrum. And that’s an honor and a responsibility that I take very seriously, and am very grateful for.

Now I mentioned that it’s a challenge too and yes it can be. I have to constantly remind myself that not everyone thinks and believes the way I do. I have to write sermons that can speak to as wide an audience as possible—knowing of course that no sermon is going to speak to everyone, that’s impossible and would make me go crazy if I tried. But it’s a challenge that I gladly accept, and I wouldn’t have taken this call had I thought I was not up to the challenge. And for those of you who think I go to far, and for those of you who think I don’t go far enough, please remember that I am not just speaking to you, but to everyone, and that the good news of the gospel is not just for you, but for everyone here.

Salt is great, in moderation. But as many of you personally know, it can be deadly. Or, to use a less dramatic example, have you ever added to much salt to your food? Add too much and you can’t even taste your food anymore can you? Now imagine that food being the very life-giving, salvific, healing, good news of God that we are called to serve the world, being over-salted by our egos, by our self-righteousness, by our hypocrisy, or just plain carelessness. Can our saltiness get in the way of the work that we are called to do? Can we be too salty? That was a rhetorical question, I wouldn’t ask you if I didn’t think so.

Jesus also calls us the light of the world. Can we be too bright? Can our lights become blinding to those around us and maybe even to ourselves? Can we be so focused on our interpretation of scripture, or on our own view of God and the world, that we then turn into the legal experts and Pharisees that Jesus refers to, causing our light to be so bright that it’s blinding to others who may think differently, who may believe differently? Can our lights be so bright that we are actually causing people to turn away?

What I don’t want is to have to say all are welcome but let me warn you, if you don’t believe or think the way the majority does here you may not feel welcome—because if I thought for a second that that’s what I would have to say to people I would have never taken this call because that wouldn’t be Christ’s church, that would be someone else’s. You are the salt of the earth. You are the light of the world. But can we be too salty? Can our light be blinding? Ponder these questions please. Not for my sake, not for Christ’s sake, but for the sake of the world that we are called to serve. Amen.
Email ThisBlogThis!Share to TwitterShare to FacebookShare to Pinterest
Labels: blinding, church, conservatives, earth, gospel, jesus, liberals, light, matthew, mount, politics, salt, salty, sermon, spectrum, world