I’ve always loved this story from the Gospel of Matthew. It’s a favorite for many. I’ve always been struck by the response from Simon, Andrew, James, and John. I’ve always looked up to them as models for anyone answering a call from God, and I still do. I look at them in awe, knowing that my own response to God was not as dramatic and certainly not as faithful as theirs. Here we have four guys, who were just minding their own business, going about their daily work, in this case they were fishermen, and then Jesus shows up and simply says, “Come, follow me, and I’ll show you how to fish for people.” According to Matthew, that’s all he said! And bam, he’s got his first four disciples, his first four followers.

They didn’t ask Jesus for his credentials, they didn’t ask for his theology, they didn’t even ask where he was going! They dropped their nets and left with him. James and John leave their nets in their dad’s hands, and follow Jesus. Who does that? How does this make any sense? I mean, the Bible is chock full of illogical stories but this is so illogical it boggles the mind. If you had a friend or family member leave their life behind after meeting some stranger who came to their place of business, tell me wouldn’t try to get them to change their mind! Wait! Hold on! Let’s think this through! Might be a few of the things you would say.

Now, most people attribute this drastic life course change to Jesus. And that’s fair, after all, Christ is God incarnate, the Word made flesh, the light of the world, the ruler of the cosmos. So over the years, people have assumed that there must have just been something about Jesus that made these four guys make this decision to drop everything and follow Jesus. Maybe it was his appearance, maybe it was the way he spoke, maybe there was something about his face, an expression maybe. Maybe there was a glow about him! Seriously, artists have had fun with that one over the centuries. Maybe they were able tap into a sixth sense and they could just feel that there was something special, trustworthy, divine, about Jesus.

Or, maybe it was none of these things, or all of these things, I don’t know! But also something else—maybe it wasn’t all about Jesus. Maybe it was also about these four guys and the journey they had been on, and the baggage they brought to this story as well. Like most stories, there is probably more to the story than what we have before us. There was certainly something about their lives that caused them to react the way they did. And I would argue that it is unfair to both Jesus, but also to Simon, Andrew, James, and John’s journey that they had traveled up to that point, to give all the credit to Jesus here.

What had they gone through? What state of mind, body, or spirit were they in and why? Were they disillusioned about something? Were they unhappy with part, or all, of their lives? What was it about these two sets of brothers, that made them so willing, so desperate, to follow Jesus? Hold that thought for a moment, and let’s shift our focus a bit. How many of you have seen the movie Patriots Day? For those of you who haven’t, I highly recommend it. Just remember to bring some tissues! It is about an event that we all lived through, even if merely through our TV’s, the Boston Marathon bombings of 2013. 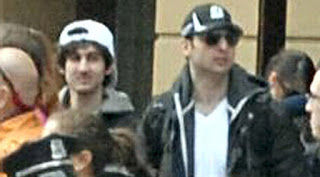 The movie follows a few different stories from different perspectives, from some of the victims, police officers, and also of the bombers themselves, another two brothers, Tamerlan and Dzhokhar Tsarnaev . And it was these two brothers that really caught my attention and maybe it’s because I knew I would be preaching on the brothers from our story for today. But I could not help but be fascinated by the comparison of these two brothers and the brothers from today’s Gospel reading. The differences are easy to see. But were there any similarities?

What was it that caused the Tsarnaev  brothers to react in such a way? What was the baggage that they carried with them on their faith journeys? What life experiences had they gone through that caused them to misinterpret their own religion the way they did? What was it about these two brothers, that made them so willing, so desperate, to follow such a drastic path, to make such a life-changing choice? Maybe the Tsarnaev  brothers had more in common with the brothers from our story than we think. However, the outcome, was starkly different.

Whereas the Tsarnaev  brothers brought darkness, death, and destruction—Simon, Andrew, James and John were followers of the one who brings light, life, and creation. All three sets of brothers were called by their faith, carrying their own life’s baggage, and answered the call. Ok, so where am I going with this. Well, it got me thinking about our own calls, calls that emerge with us up out of our baptismal waters. The call to bring Christ’s light into the world, Christ’s life into the world, Christ’s creative power into the world—a world that is at times very dark, full of death and destruction. A heavy responsibility I know.

And it also got me thinking about the baggage that we bring to that call and what we do with it. I think we can all agree that each of us brings baggage to our call as baptized children of God. Yes? And I think we do that corporately too don’t we? Our 75th anniversary has certainly conjured up a certain amount of baggage. Maybe even some that we thought we had gotten rid of. But whether we are talking about our individual baggage or our collective baggage, what do we do with it. My advice—don’t ignore it. That may be the most dangerous thing we can do with it. Our life’s baggage that we accumulate has a way of rearing its head whether we like it or not. Why not get ahead of it, acknowledge it, and exercise some power over it.

Especially because God can use it! Remember, Christ is God incarnate, the Word made flesh, the light of the world, the ruler of the cosmos! Is there anything Christ can’t do? And Jesus did not call Simon, Andrew, James, and John because they were perfect, because they had their life together and all their ducks in a row. Far from, as we will soon see as we read the rest of Matthew’s Gospel! These guys have a long road ahead of them before anyone will consider them worthy of the title disciple! Which brings me to one last thing. This also has me thinking about how we welcome newcomers into our midst.

Newcomers have an equal amount of baggage of their own right? How do we know that? Because we have our own baggage that we carry with us everywhere! And newcomers, as well as those that you encounter outside these four walls when you represent Christ and the Church to them, need to know that! They need to hear those stories of your baggage, of your imperfections, of your struggles, and even of your pain, when you are ready. This is not the time or the place for our egos to get in the way and keep us from being vulnerable to those who are seeking, whether they come through these doors or not.

This is not the time nor the place to put on a front and hide who we really are—imperfect beings, in need of a savior, just trying to make it through this world, together—and hopefully leaving it better than when we found it. That is who we are and we should not be ashamed of it. I cringe a little at the end of every funeral, when I stand at the remains of the deceased, and put my hand on them in blessing, and say these words, “Into your hands, O merciful Savior, we commend your servant. Acknowledge, we humbly beseech you, a sheep of your own fold, a lamb of your own flock, a sinner of your own redeeming. Receive your servant into the arms of your mercy, into the blessed rest of everlasting peace, and into the glorious company of the saints in light.”

It always seems unfair, a low blow, to call a person a sinner after they die. But that is the truth of our existence and that is what the world needs to hear us proclaim. That though we are all on this journey of faith, that does not mean that we have our lives together, that we have all the answers, that we’re perfect, or that we even know what in the world that we are doing half the time! But we do know, who we are doing this work with don’t we. With each other, and with Christ, God incarnate, the Word made flesh, the light of the world, the ruler of the cosmos. Thanks be to God. Amen.