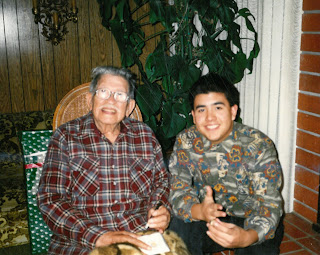 My grandfather died when I was seventeen. Unfortunately, I didn’t know him nearly as well as I would have liked. He lived in Colorado, we lived in California, and we would visit him every two or three years, and he would visit us every year at Christmas time. Like many kids, every time my dad would hand me the phone and tell me to talk to grandpa I would roll my eyes and mutter through the same conversation that we had my whole life. He would ask me how the grapes were doing, because I had a grape vine in my back yard. He would ask me how my jalapenos were doing because I grew them in my front yard. And then we would talk about the weather.

At the time I thought these were pretty boring things to talk about. It wasn’t until later in life, much later, like when I was writing this sermon, that I realized that those were all things that him and I had in common. He too grew grapes in his back yard. He too grew jalapenos. And he too lived under the same sky as I did, even though were miles apart. His English was pretty broken, but these were ways that we could connect, in spite of the physical distance between us.

After he died I realized just how much I didn’t know about him. And it wasn’t for his lack of trying. I remember him sitting me down the last time I saw him, he was already 92 years old then, and he shared a few stories with me from his life. Stories that I later learned were unknown to his own children. But I, like most teens, didn’t recognize the importance of those stories at the time, or why he was even sharing them. Since that time, the older I get, the more I want to know about him. So, I have over the years made an effort to do that in various ways:

My father and I have had many conversations about his dad. As well as some conversations with his two sisters. About ten years ago I also spent a summer doing some serious genealogy work with my dad and learned a ton about him and the family whom he came from. I went to the United States Army National Archives which just happened to be within easy driving distance from where we lived in PA, to learn more about what his Army regiment went through during World War One. And I visited the town where my dad grew up, where my grandpa built his one bedroom house with his own two hands for his wife and three kids. I’ve visited the site where he operated his shoe repair business, and even talked to some of his competition that are still alive.

These are some of the ways that I have attempted to get to know him better over the years since his death. But a funny thing has happened as I have continued to get to know him. I’ve gotten to know my dad better, and my aunts. I’ve met people I never would have gotten to know. I’ve made connections with family members that I didn’t even know existed. I’ve learned more about World War One and the U.S. Army. I’ve learned about the struggles of a newly immigrated Mexican-American family.

In a very strange and mysterious way, I feel like I know him better now, than I did that last time he sat with me and shared a few stories with me. And I don’t mean I know more about him, I mean, I know him better now. I can feel his presence in my life in a way that transcends the way that he was physically present with me. And this has not only helped me to learn about myself, and what makes me and my dad the people that we are today, but my grandpa also continues to form me into the person that I will be.

Now so far, this sermon has gone against the grain of all my preaching sensibilities. Up until this point everything I learned in seminary about preaching has gone out the window. I can almost feel my preaching professor, may she rest in peace, tapping me on the shoulder saying, “This is not supposed to be all about you Ron!” So, why am I sharing all this about my grandpa? Today is the Day of Pentecost. One way to celebrate it is to remember how the Holy Spirit came to those first disciples a long time ago which some have called the birthday of the church. But maybe a more profound way is to celebrate the presence and work of the Holy Spirit now, within you and me, the church, our neighborhoods, our country, and our world.

Jesus says “Don’t be troubled.” Don’t be afraid. He said this because he knows he’s leaving. In the same way that my grandpa sat me down that one last time to share those final thoughts and stories, Jesus talks with them in the same way, knowing that he will soon be gone. And he tells them that another one is coming, a companion he calls her, the Holy Spirit. And here’s the amazing part.

Jesus knew that he could be present with his people in a way he couldn’t before, through the work of the Holy Spirit. He knew that his death would open up possibilities for him and his people, you and I, that simply weren’t there before he died, rose and ascended—as: a companion, as the Truth in lives filled with uncertainty, as peace in our chaotic lives, as a reminder of who God is, as our faithful teacher, as the very presence of God on Earth. 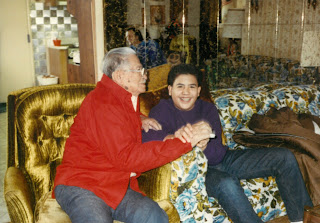